Moving // Dialogues - Modes of Being (Together) 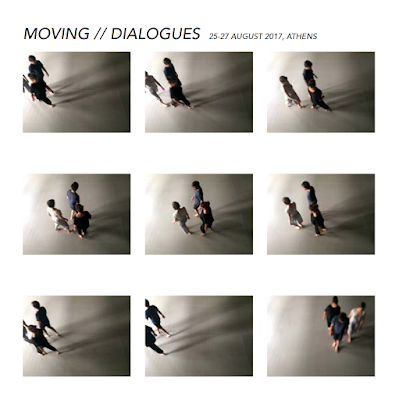 Curated and conceived by choreographer Sara Wookey, Moving // Dialogues: Modes of Being (Together) is a pilot programme and mobile platform that aims to create space and time for moving together and experimenting with forms of dialogue in order to imagine what can become. From 25 - 27 August, 2017 it was hosted by Kitiniras: Artistic Network for Performing Arts in Athens and involved Roderick Schrock, Director of Eyebeam (New York); Rennie Tang, architect and designer (Los Angeles); Emma Cocker, writer-artist (Sheffield/Nottingham, England). The programme consisted of: Moving // mixing and circulating; Improvising // imagination, participation, adaptation; Eating // environments and inter-action; Dialoguing // social interstices, interlocutors and states of encounter; Materialising // making and sharing from doing

I am currently working with NTU fine art colleagues towards the staging of a research ‘convivium’ entitled No Telos, which is scheduled to take place in Venice this September, as part of a wider academic partnership with the East Midlands 2017 (EM17) Research and Development project at the Venice Biennale. Convivium – pertaining to a feast: a model for being-with, from com - ‘with, together’, and vivere - ‘to live’, vital. We conceive the convivium as a social model for ‘spending time’ together to ‘feast’ on and explore shared research and ideas. The ‘convivium’ is a cross between an artists’ residency and symposium, held over 3 days we will explore and engage with the two separate key themed strands. The event will be held throughout the city, within the biennale, and over convivial communal evening meals.

No Telos
Telos – with its etymological origins in the Greek télos (end), téleios (perfected) and teleîn (fulfillment) – refers to an ultimate object or aim, a specific end or purpose. In teleological terms, the value of action is essentially goal-oriented, determined in relation to achievement and attainment, the event of completion, of finishing, of reaching the designed destination or target. Arguably, through its radical ‘purposeless purpose’, art operates in wilful refusal or subversion of this teleological tendency. The Venice Convivium takes the theme No Telos as its overarching guide, seeking to explore this through various approaches that emphasise the journey of process as a subversive or resistant act; that embrace the potential of open-endedness and unfixity as core principles; that privilege meandering, tarrying, waiting and deviation above finding the quickest path; that favour opening things up rather than reaching a conclusion. The principle of No Telos will be explored through two strands of enquiry that broadly address ideas of process + place respectively, provisionally identified as:
* Process as a subversive act: approached through the complementary practices of ‘doing’ (including ‘dirty practices’ and the rebellion of making, experimentation, play) and ‘not-doing’ (with an emphasis on a certain withdrawal of action through slowness and stillness, contemplation and observation, alongside meditative, durational or even ritualistic practices of attention)
* Place / Under construction: taking the site-specificity of Venice as an external stimulus or context for working ‘in situ’, this strand reflects on the inscription, description and narrativising of space and place, the contingent and provisional stories (histories, conversations, fictions) and [human] traces that collectively constitute and re-constitute the archaeology of locality.
No Telos members include Andrew Brown, Emma Cocker, Katja Hock, Danica Maier, Andy Pepper, Derek Sprawson. EM17 partners include: New Art Exchange, Nottingham; Quad, Derby; Beacon Art Project, Lincolnshire; 1 Thoresby St., Nottingham.