The Summer of Dissent

I will be producing a new piece of critical writing in response to the proposed Summer of Dissent at Plan 9. The Summer of Dissent brings together a range of practioners seeking to dismantle and reassemble cultural norms through collective action and singular acts of sedition. Events reflect concerns around physical and mental survival - ranging from The Keepers, a mapping project that seeks to preserve and build knowledge of urban wild food, to The Coming Insurrection, a discussion around freedom of speech and textual terrorism. By collectively scrutinising the current geo-political situation through the prism of cultural production these events invite the audience to view, collaborate and question. 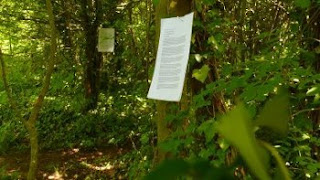 The programme at both Plan 9 and off-site venues, includes the enactment of Guy Debords' Game of War by Rod Dickinson & Class Wargames; a psychic meeting calling for an Art Strike by the Second Temporary Art Strike Action Committee (Alytus Chapter); weapon making with Girl Gang; research into insanity by the collective Alialani; and a public swim protest with Kayle Brandon and Heath Bunting.

A publication will also be produced to document Summer of Dissent with a commissioned text by Emma Cocker and a specially produced flyposter from Laura Oldfield Ford.
More information can be found here.
Links to this post

In a format that resembles a workshop but that aims at a collective research-creation process participants will use movement and rhythm as techniques to explore how to know Zagreb through affects. Participants will share a short reading pack, which includes philosophical texts, as well as other relevant writings and images that will set a common ground of knowledge about the city.