I will be presenting a paper/reading at a forthcoming symposium, Critical Engagements with Engagement on Friday 26th July, 10am – 4pm at the Bloc gallery, Sheffield. The symposium will focus on the discussions and debates that surround public and artistic engagement. Drawing on my own practice-based involvement in various participatory research projects (specifically the performance collaborations Open City and Performing the City), my presentation gathers together prose extracts and photographic visuals gleaned from my ongoing research enquiry, Performing Communities. Performing Communities interrogates how participatory performance-based interventions in the public realm can help support the emergence of critical – and potentially resistant – models of subjectivity and collectivity, specifically those forms of ‘temporary invented community’ (Miwon Kwon) created in and through the act of participation itself. Within this enquiry I investigate how participatory performance practice might intervene in and challenge how the public realm is activated and navigated, through its capacity for producing ‘counter-publics’, new social formations for rehearsing and testing alternative forms of individual and collective subjectivity. 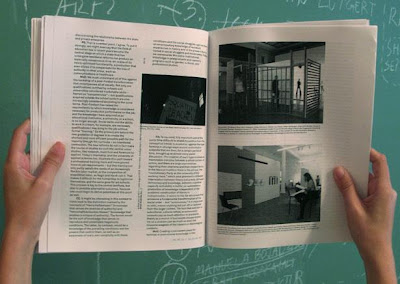 "Openings in the fabric of the visible are thus not so much produced then as encountered, fleetingly glimpsed. Here, the glimpse operates as an aperture in the real, a portal to other places and times, both future and past. The horizontal landscape of what is present is ruptured by another frequency of experience, the vertical or vertiginous force of something felt or sensed. A glimpse is experienced as a poetic fall from or faltering within what is known or certain. It exists at the cusp of recognition, where the witness is left unable to fully find the words for communicating what they have seen. The glimpse is always a little otherworldly, for it marks the opening of one world or reality onto the possibility of others. Those receptive to the glimpse thus inhabit a zone between two worlds, between now and elsewhere, between the actual and imagined". Emma Cocker, Glimpsed, Only in Certain Light, 2012

On 1 August, I will be leading a study session introducing art-writing practices (specifically in relation to ideas of glimpsing, the fragmentary, and the art-writing of the author and philosopher Hélène Cixous) as part a Summer study group Hélène Cixous Sight Unseen Study Sessions at Nottingham Contemporary, led by academic Sarah Jackson (Programme Leader, MA Creative Writing, NTU). Subsequent sessions (led by Sarah) focus on areas including Writing Like Painting; Reading and Writing Differently; The Invisible; Writing and Blindness. The programme includes a ‘conversation’ between Hélène Cixous and Alexandra Grant on 10 September 2013. More about the Hélène Cixous Sight Unseen Study Sessions can be found here.

The session has been a space for me to consider the relation of glimpsing and the fragmentary within the process of writing; specifically for differentiating between two different modes of glimpsing operative within my own writing practice: firstly, where 'glimpsing' refers to a "very brief, slight, or passing look, sight, or view"; where insights are gleaned through the process of skimming, glancing, 'looking away' or of things "caught fleetingly in the corner of the eye". Drawing on reflections from my text 'Reading Towards Becoming Causal', in Reading/Feeling, I am interested in how "A glimpse can collapse the totality of a text into a single word. Illumination can be kindled from the smallest flame. The significance of a text can take years to unravel; the impact of another can be felt in a lightening flash.” Secondly, 'glimpsing' is less to do with the brevity of the glance, but rather refers to "a momentary or slight appearance", moments of revelation (of rupture) which might only be produced through sustained, slowed forms of attention. Certainly, within my own practice this relation between the speeds and slowness of attention creates the conditions for the production of critical glimpses - "inklings, vague ideas" that are the germinal terrain of writing; and here, the fragmentary is perhaps the true means through which the glimpse can faithfully be attested. 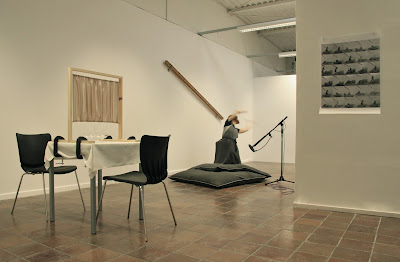 During July, Clare Thorton and I have been developing work and ideas from within our ongoing collaboration, Tacturiency, as part of Summer Lodge, an annual workshop event in the fine art studios at Nottingham Trent University. The Summer Lodge workshop provided a context for us to develop the initial idea of 'studio/gallery as gymnasium' - a charged site for 'working out', for testing mind/body through a series of staged exercises. Sculptural components were conceived as a set of interlocking or modular apparatuses, points of leverage or provocation for a series of propositional performance actions. Photographic and time-based documents (including sound and video) were used as 'propositions', intimating towards both past and prospective action (how the space might be activated) in the absence of the live body. An archive of our ongoing enquiry can be viewed here.

Proposition for repeated action The Italic I (recursive loop) - this experimental body of work-in-progress (below) is one of the exercises that we were testing during Summer Lodge, emerging from our interest in the different registers of repeated action operative in the work - (1) as witnessed in the photographic capture of motion (as chronological or sequential frames); (2) in the similarity between images from different falls (difference and repetition); (3) as a form of recursivity - the production of feedback loops.

The Italic I is a modular body of work by Cocker + Thornton for exploring the different states of potential made possible through voluntarily surrendering to the event of a repeated fall. The gallery is approached as a gymnasium, a training space for rehearsing, isolating and interrogating distinct moments or stages within falling; for attempting to slow and extend the duration of falling in order to suspend and elaborate upon its discrete phases or scenes. Sculptural apparatuses create leverage against which a body dangles, tilts, arcs; performance documents operate as propositions evoking action, activating space in the live body’s absence.


With thanks to Christine Stevens and NTU studio assistants. 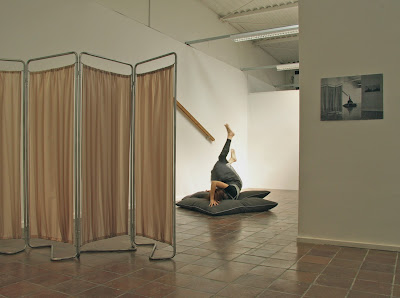 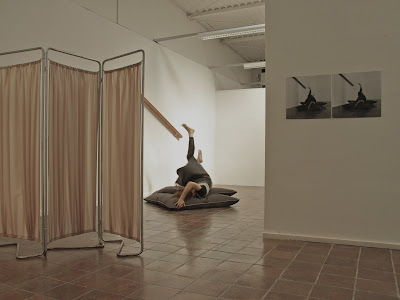 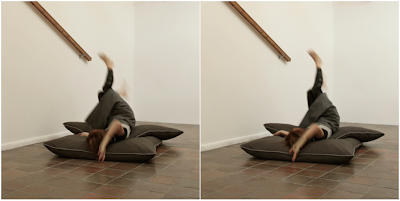 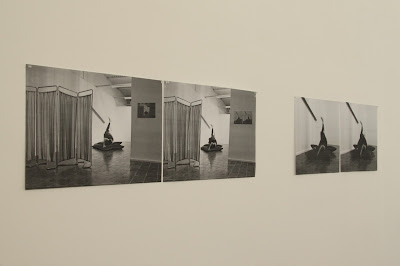