Exhibition: Your Future Needs You (Part 1)

Below are images from the exhibition 'Your Future Needs You' which is currently showing at Art Gene, Barrow-in-Furness. I am showing a new version from the ongoing series, Field Proposals as part of this exhibition. The 'Field Proposals' will also be developed through a new performative mapping staged as a live or unfolding event within the space of the gallery, which responds to the specific geographical and conceptual terrain encountered during a series of visits to the area. This mapping will also operate as a working model or drawing board for a piece of new writing which responds more specifically to Urban Retreat, a project that artist Sophie Mellor is undertaking in Barrow-in-Furness through September. 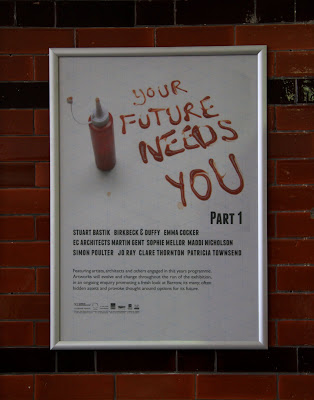 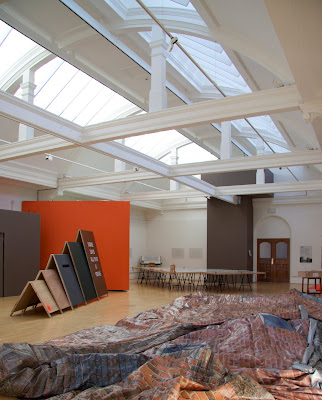 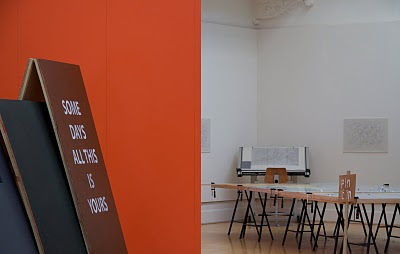 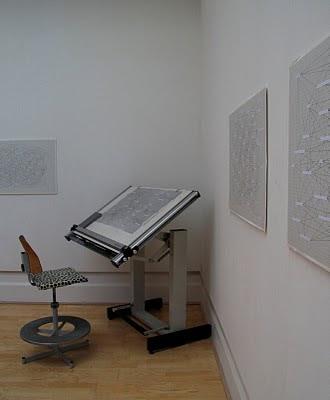 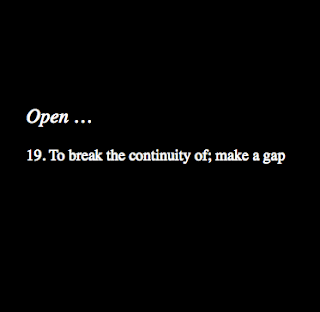 What (how) is critical?
The first in a series of ESP events using writing to generate discussion, I have been invited to respond to the question, ‘What is critical?’ with reference to Irit Rogoff's text 'From Criticism to Critique to Criticality'.
I am hoping to use the session to 'open up' a conversation for exploring the critical as the 'gap' or mode of attention produced between crisis and receptivity, rupture and affirmation.

I will be reviewing the forthcoming ANTI festival for Frieze magazine. I am proposing to use the opportunity to think more about different modes or experiences of time as encountered (and indeed produced) through practice (and language). In turn, these ideas will also form part of the thinking space or research for a new text that I am currently developing in relation to the work of Karin Kihlberg and Reuben Henry.
Words for Marking Time
In this review of the ANTI festival I am proposing to focus on the relation of language to time, on writings for marking and performing time. My intent is to move from an understanding of this relation as being one of tense (from words which locate a performative situation or action in time) towards an interrogation of performative forms of writing which speak more of the qualitative, the how (rather than the when) of writing’s timing. With reference to specific works in the festival I want to focus on kairotic writing, texts that are all about opportune timing or biding your time. Whilst chronos signals chronological or sequential time, kairos describes that moment of an undetermined period of time in which something special happens or is missed. Kairotic texts thus emerge from chance encounters and unexpected synchronicities; they speak out for or against when the occasion calls; they are invitational texts which create openings or opportunities, or else signal the taking place of incidental events whose potential all too often remains unrecognised or ignored. Whilst kairos resists the logic of chronos by focusing on the fleeting instance of opportunity or of a moment passing, there are other forms of performative writing that speak more of the durational properties of time passing,  that unfold over time. However, rather than simply marking or measuring time as a clock might, these durational texts reflect an elastic experience of time, where the passing of time is always uneven and discontinuous, inconsistent and full of holes. These writings elucidate an experience of time as it is a shaped by boredom, immersion, exhaustion, collectivity, conversation, memory, guilt, regret. Collectively both kairotic and durational texts attest to the different ways whereby time is not only passed, but also actively spent, caught, wasted, killed, saved, lost, found, remolded or re-edited through the performative act of writing.

Below is a transcript from the 'in conversation' I had with artist Candice Jacobs at G39 in Cardiff. The text chimes with some of the ideas explored in my recent text, Without Rhyme or Reason on the work of Vlatka Horvat. An edited version of the transcript will be appearing in a forthcoming issue of the Nottingham Visual Arts magazine. 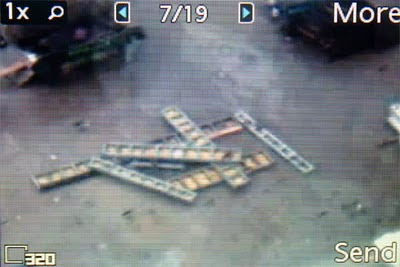 I have been commissioned to produce a new piece of writing/text for a publication to be published later this year by Edge of Europe project. The writing will be developed specifically in the context of the Writing, Language and Site seminar programme that is part of this year’s ANTI festival in Kuopio.
Edge of Europe is a digital, social and experimental project in the areas of performance and writing. The project explores the artistic and critical possibilities of writing and other forms of textual work in their relation to contemporary performance.
The main concern of the project is in the role of live performance in the current society. However, it looks ‘performance’ widely through performance art, Live Art, contemporary theatre and dance, contemporary visual art, literature, media art and beyond. The project results as meetings, texts in web and different traditional media, new connections of artists, writers and operators, writing and performance laboratories, seminars, presentations and performances.
Edge of Europe includes professional exchange and development of knowledge on contextualization practices, artistic writing and innovations that combine writing and performance. Its nature is collaborative, experimental and interdisciplinary. Edge of Europe celebrates opening up possibilities in writing about and for performance, not closing them down.
The project is a part of Kiasma Theatre's (Kiasma Museum of Contemporary Art, Helsinki, Finland) activity 2008-2010. It is designed and coordinated by artist Maija Hirvanen. 2009-2010 Edge of Europe has been funded by Nordic Culture Point

Below are images from the performance reading Re- which was presented as part of the launch event for Afterlive at Norwich Arts Centre on Saturday 4th September. The performance reading was presented in conjunction with Re- (Reader). Re- is an iterative work which responds and is reworked in relation to the specificity of an invitation to perform. A previous iteration of the work can be found here.

Re-
Rachel Lois Clapham and Emma Cocker essay the relationship between performance/document, live/recording, writing/written. This collaborative reading presses on two writers – and two writing practices- coming together to explore process, product and performance (of text). 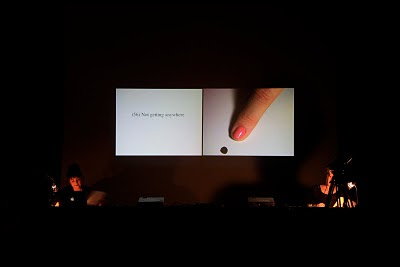 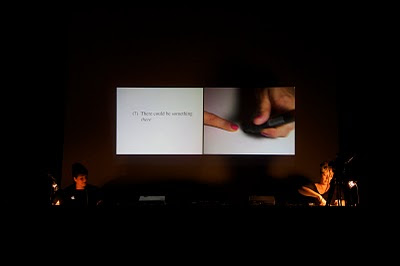 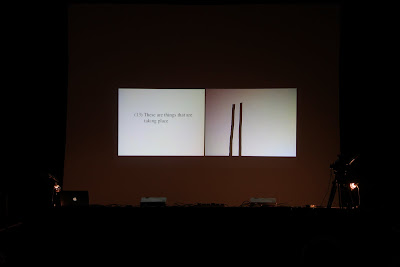 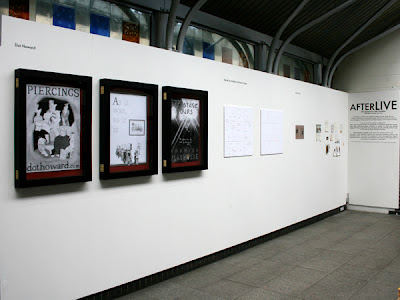 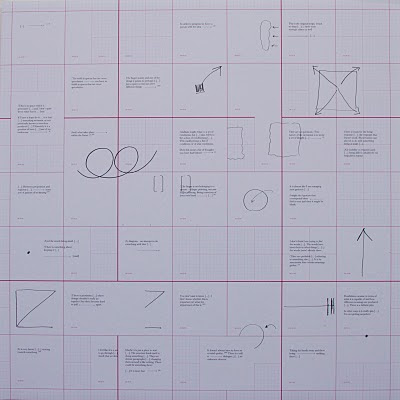 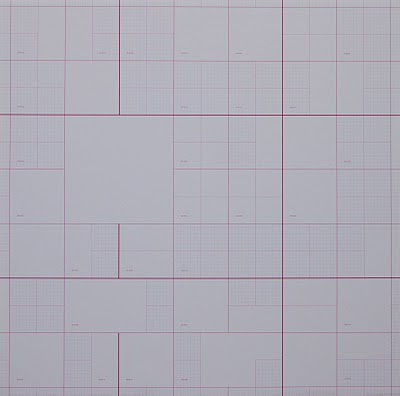 Below are a series of images of my project 'Field Proposals' installed as part of the exhibition WRITING/EXHIBITION/PUBLICATION, currently at The Pigeon Wing, London.
‘Field Proposals’ are an ongoing attempt to map or give shape to the conceptual landscape of a practice, where the identification of specific coordinates fails to provide any coherent or definitive structure, instead only revealing further zones of indeterminacy. The work exists as a pairing of two proposals. The first uses the titles from existing work in an attempt to plot the coordinates of or establish the cartography of a practice, where intersecting lines suggest as-yet-unnamed possibilities that for now remain indiscernible. The second is largely blank, in further anticipation of this still to be navigated territory. The process of mapping does not lead to knowledge or understanding, but instead creates further uncertainty, drawing attention to areas (of the map) that are currently unknown, unexplored or unaccounted for. 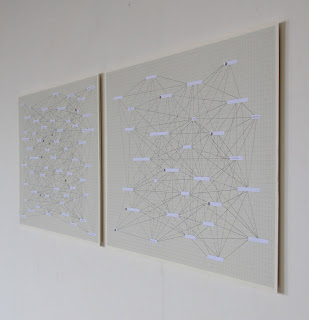 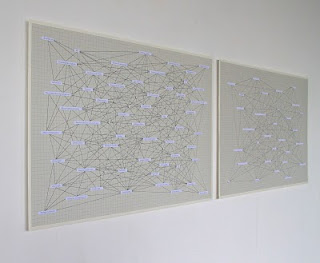 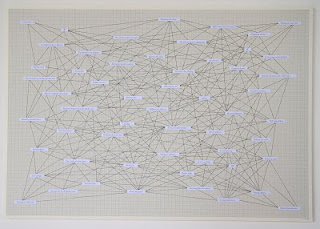 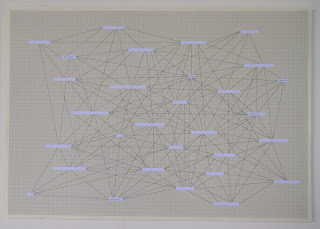 More about the exhibition below
For their residency at The Pigeon Wing, VerySmallKitchen presents a month long exploration of how writing moves (or not) between the locations of WRITING/ EXHIBITION/ PUBLICATION. Throughout September The Pigeon Wing will be both workspace and exhibition, offering space for a programme of exhibitions, readings, performances, research projects, libraries, and screenings, exploring an abundance of forms and practices at the interface of writing and art practices.
Notes, essays, scripts, scores, propositions, live writings, scrawls, appropriations, assemblings and dissemblings, accretive structures and deletions are some of the strategies to be explored by a range of contemporary practitioners from the UK, Hungary, Ireland, the US and elsewhere. Throughout the exhibition, the gallery will also provide a focal point for the THE FESTIVAL OF NEARLY INVISIBLE PUBLISHING, a programme of self-organised events happening throughout the world, evidence of which are submitted to the gallery for archive and display.
The unfolding exhibition is organised around four key areas: WRITING LIVE, THE DEPARTMENT OF MICRO-POETICS, EXHIBITION/ PUBLICATION, and ASSEMBLING (the last presenting a remarkable exhibition-within-an-exhibition from Franticham/ Red Fox Press’s unique archive of rare assembling publications from 1970-2010). Whilst many artists have created texts and installations specifically for the space, others will produce work that unfolds at each of the live events, whilst further scores and contractual arrangements unfold at times not publicly announced. As part of Deptford X a final weekend will see artists working in the space leading up to a final performance event and feast. As well as opening and closing performance events, the schedule currently includes: Ignite and Reprise: Films by Matthew MacKissack, LemonMelon Publishing Seminar, DISSASSEMBLING CANNON by Phil Baber, Aphorism as Art Practice Study Afternoon, conversations with Simon Cutts and Francis van Maele and month long writing residencies from Press Free Press, Julia Calver, Hammam Aldouri (assistanted by Helen Kaplinsky) and Tamarin Norwood. See www.thepigoenwing.co.uk/events for full timetable of events as it develops.
CONTRIBUTING ARTISTS:
Hammam Aldouri,  Phil Baber , Bagazine,  Julia Calver , Maurice Carlin,  Anne Charnock , Rachel Lois Clapham , Emma Cocker,  Simon Cutts, Matt Dalby,  James Davies,  Sonia Dermience, Karen Di Franco, Marianne Holm Hansen, Sarah Jacobs, Joy as Tiresome Vandalism, The Knives, Forks and Spoons Press, Helen Kaplinsky, Márton Koppány,  Freek Lomme/ Onomatopee, Matthew MacKissack,  Marit Muenzberg/ LemonMelon,  Tamarin Norwood,  Pippa Koszerek, Mary Paterson, Press Free Press, Red Fox Press  Colin Sackett,  Seekers of Lice
Newer Posts Older Posts Home
Subscribe to: Posts (Atom)