Conference: On the Epistemic Kinetics of Gesture 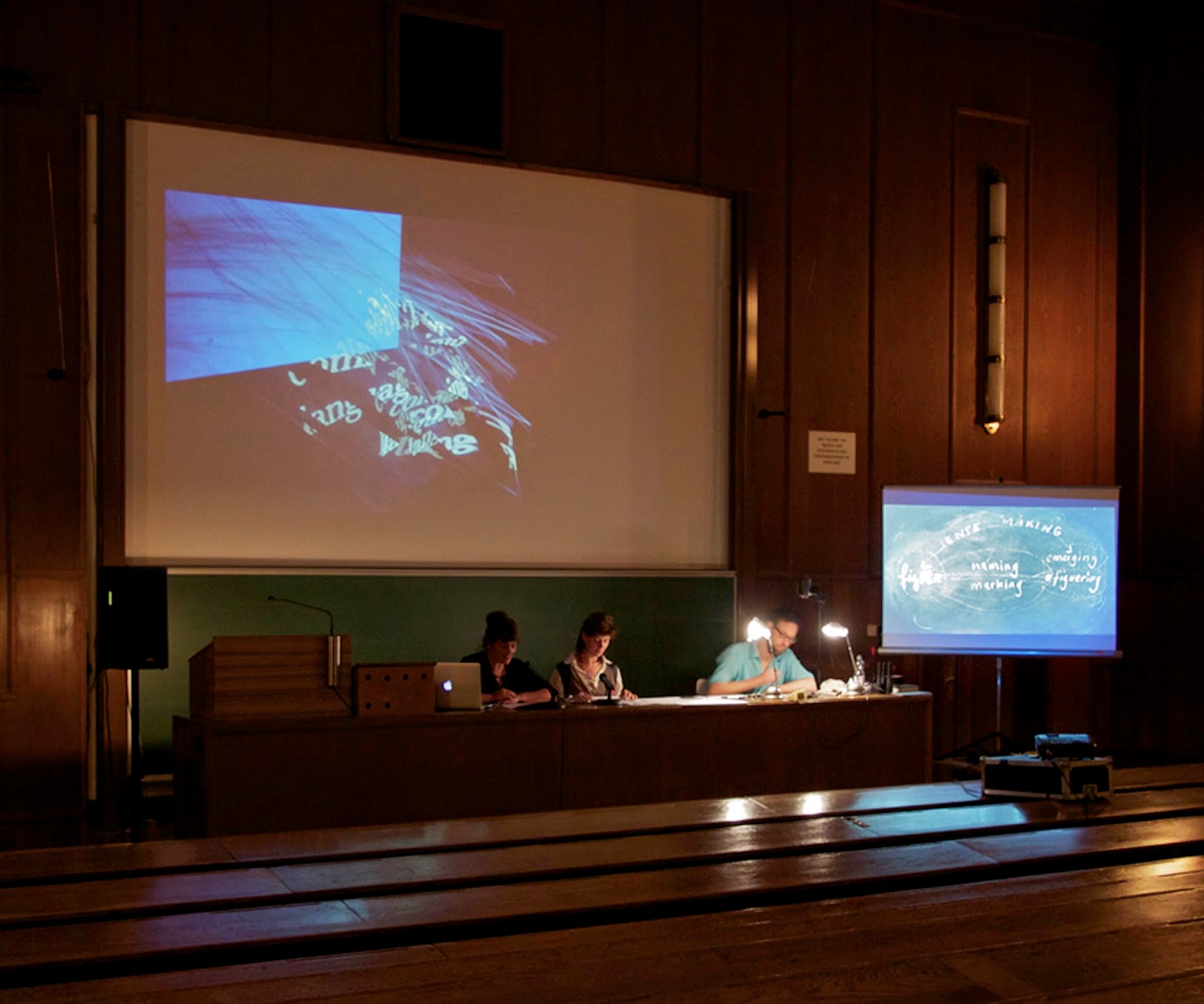 Diagramming: from performance lecture by Gansterer, Greil, and Cocker

I will be presenting a performance-lecture (with Nikolaus Gansterer and Mariella Greil) based on our research project Choreo-graphic Figures: Deviations from the Line, as part of the Body Diagrams: On the Epistemic Kinetics of Gesture conference, a symposium on body semiotics at the 14th international Congress of the German Society of Semiotics [DSG] 2014 “Verstehen und Verständigung” [Comprehension and understanding] at the University of Tübingen 23rd  – 27th  September 2014. 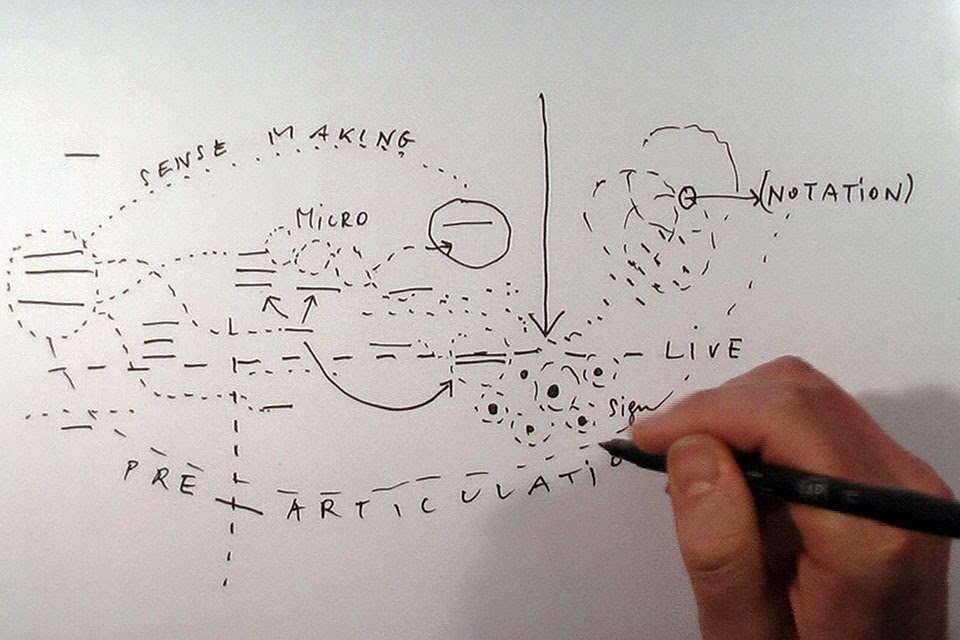 Diagramming: from performance lecture by Gansterer, Greil, and Cocker

About the conference panel: Across various disciplines, the epistemic kinetics of manual gestures and other forms of bodily movement typically employed in everyday discourse as well as more specific contexts of meaning-making and knowledge mediation is becoming more and more recognised ... Gesture, posture, and forward movement also assume crucial roles in ascribing meaning to objects and scenes in the visual and performing arts, e.g. design, image, drama, dance, and film. Not limiting gestures to communicative modalities apt to represent objects and actions or to manage social interaction, this conference explores gestures as diagrammatic tools in the dynamic development of human conceptualization and knowledge of the world. Taking into account kinetic, haptic and sensed qualities of meaningful experience and expression, the guiding assumption is that concrete body diagrams do not merely represent and reproduce, but first and foremost bring about, transform and constitute ideas and understanding in action-perception cycles. 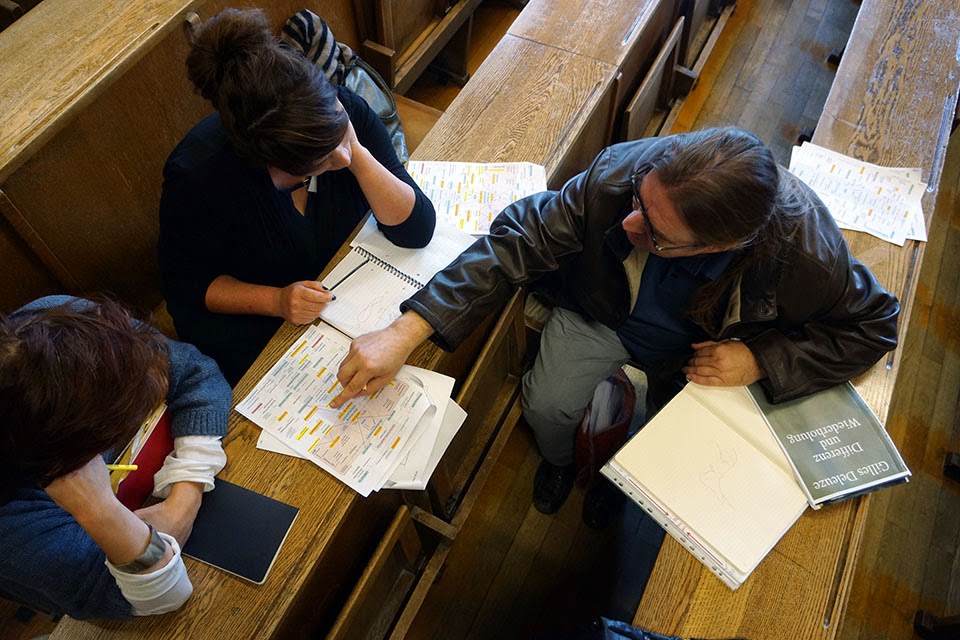 Bodily practices of interest include manual and full-body gestures of indicating, pointing, placing and positioning, gestures of seizing, capturing, articulating and explicating; gestures of drawing, graphing, underlining, labeling and delimiting; gestures of (re- and dis-)placement and expansion, gestures of opening and resistance of the body, gestures of linking, relation and correlation, merging, grouping and splitting, gestures of schematization, gestures of creation, performance and displaying, that is, gestures that generally instill coherence, understanding, and meaning. While acknowledging the fact that such gestural diagrams may indeed trace relations or constellations already experienced or learned, by relating gesture and diagram, however, our main aim is to explore their creative potential and epistemic functions, that is, ways in which body diagrams may serve to sense, trigger and establish new thoughts, connections and conceptual/semiotic structures.


In September I was working again with Nikolaus Gansterer and Mariella Greil to reflect on the processes and expanded practices developed as part of Method Lab I (July - August, Vienna) within the research project Choreo-graphic Figures: Deviations from the Line. We were working together for an intensive week at PAF Performing Arts Forum in St. Erme. On 17th September we presented a work-in-progress performance-lecture to fellow residents at PAF. More images here. 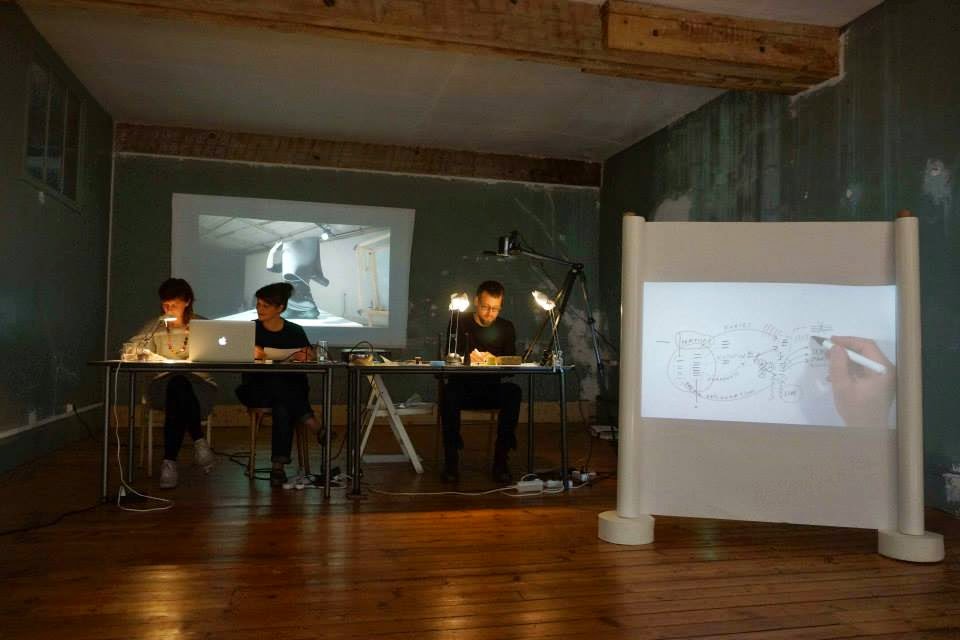 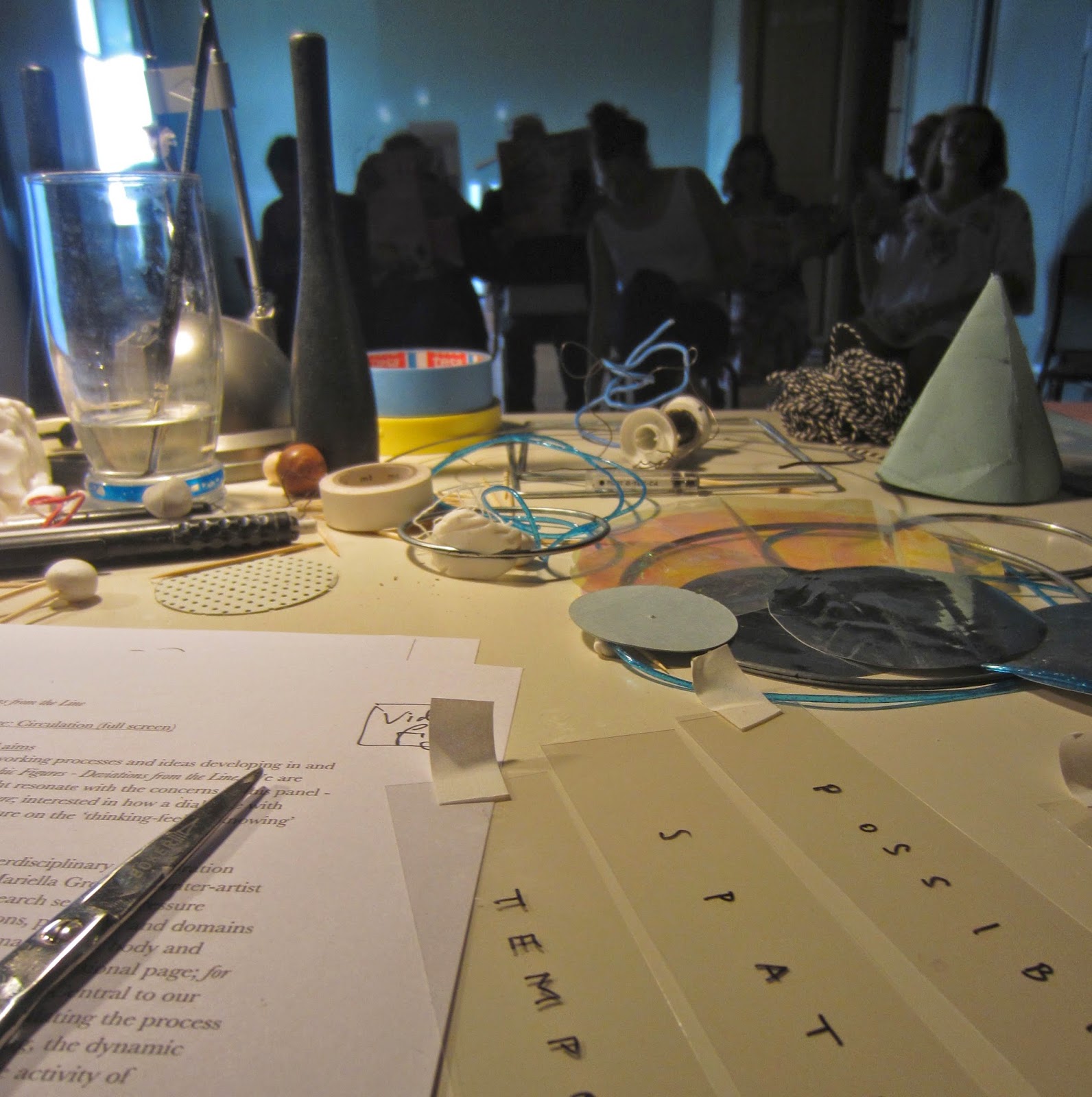 I will have a text-work included as part of the forthcoming publication Ways to Wander : A Footwork [1] compendium of suggestions, instructions, rules and activities for walking. Edited by Claire Hind and Clare Qualmann ( Footwork/Walking Artists Network). More details to follow soon.

Ways to Wander  - an interdisciplinary catalogue of ways to engage with walking from simple ideas to complex instructions, philosophical musings to playful encounters. Inspired by the multi-disciplinary approaches and experiences of the Footwork research group, and by Professor Carl Lavery’s ‘25 Instructions for Performance in Cities’ [2], this compendium aims to assemble a series of short texts that can be used to construct, interact with, or be encountered on a walk. The text may be for any location: urban, suburban or rural, or it could be site and/or route specific. Contributions may offer an improvised experience, or a more structured task. The context may be geological, environmental, historical, autobiographical, pedagogical, political, playful, spiritual, critical, or any combination of these.

Postcard No.5 - a text work from my collaboration with Open City (Andrew Brown, Katie Doubleday, Simone Kenyon - and originally commissioned as part of NottDance'07) is going to be included as part of a project entitled Walking from Scores by Elena Biserna. 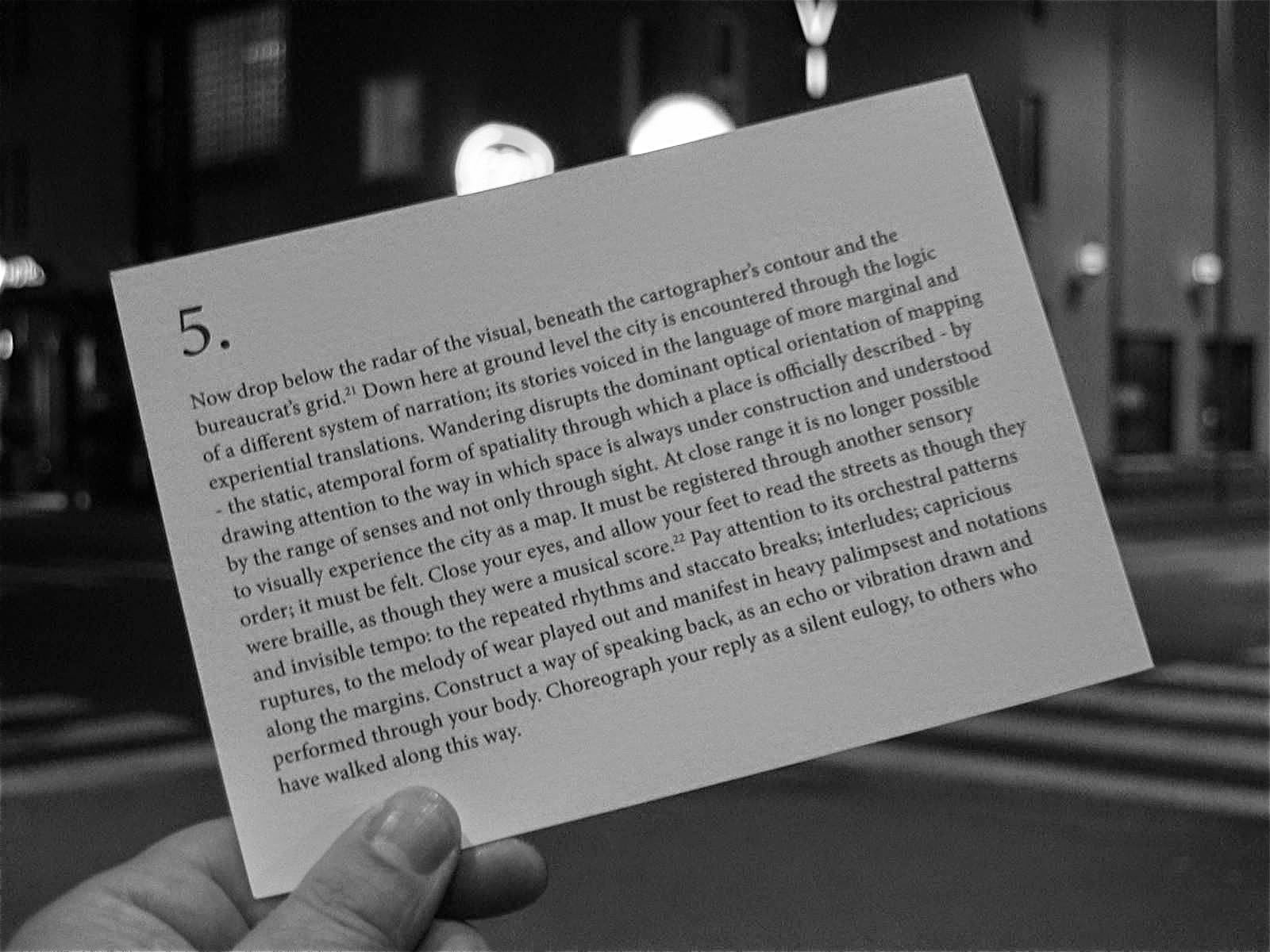 Walking from Scores is a collection of old and newly commissioned scores and sets of instructions by artists involving walking, listening and sounding in urban space. Starting from Biserna’s ongoing investigation on the relationship between expanded sound and the everyday sphere, the projects focuses on artists' scores – conceived as catalysts for action following the tradition of Fluxus event scores – and on walking and moving – conceived as a way to establish a dialectical relation with the everyday and the context. The title is an appropriation of Ken Friedman's text Working from Scores, originally published in 1990. In this text, Friedman introduced his notion of “musicality” in visual art and intermedia, interrogating ideas of “authenticity”, “intention” and “meaning” and understanding the artwork as a set of instructions that allows a constellation of different interpretations. Embracing this open approach, the project consists in a scattered intervention in the 3-day long event Catacomb Bomb curated by Xing in several venues in Bologna. Scores and instructions by: G. Douglas Barrett, George Brecht, Cornelius Cardew, Stephen Chase, Hugh Davies, Bill Diez, Francesco Gagliardi, Christopher Hobbs, Dennis Johnson, Milan Knizak, Alison Knowles, Takehisa Kosugi, La Monte Young, Max Neuhaus, Paoline Oliveros, Michael Parson, Ben Patterson, Mark So, Davide Tidoni, Wolf Vostell (& more to be confirmed).

Project: The Italic I 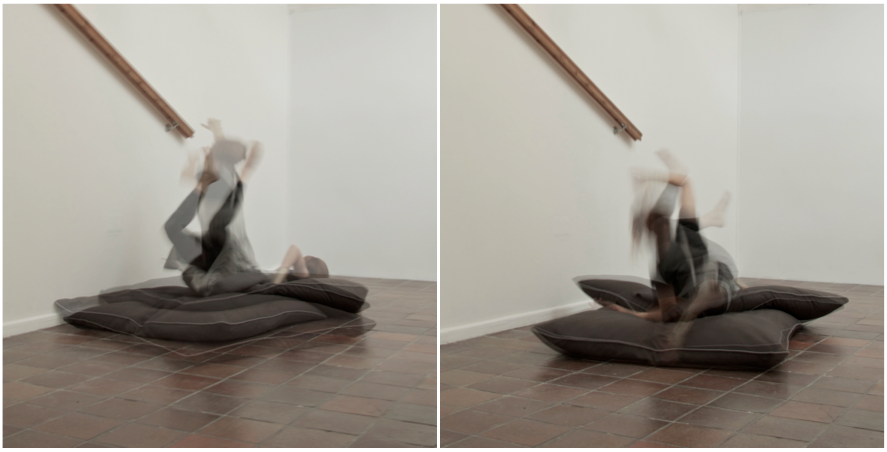 Emma Cocker and Clare Thornton have received funding from the Arts Council of England - Grants for the Arts to develop a series of exhibitions and performances entitled The Italic I.

The Italic I is a collaborative interdisciplinary project by Emma Cocker and Clare Thornton, comprising new sculptural, time-based and textual works for exhibition, animated by a series of live events. Within The Italic I, Cocker and Thornton approach the gallery as gymnasium, a training space for exploring the different states of potential made possible through voluntarily surrendering to the event of a repeated fall. The Italic I involves an attempt to slow and extend the duration of falling in order to suspend and elaborate upon its discrete phases or scenes, which in turn sheds light on the process of artistic collaboration itself and the making of meaning within creative labour.

We are seeking new vocabularies for reflecting on the labour within artistic practice. We address states of ‘not knowing’ within the creative process focusing on the act of collaboration itself as a site of desirable negotiation. We are striving to find the means for speaking about the experience of practice, wrestling with the idea of what it is to collaborate. The motif of the fall becomes the foil through which to reflect on the undisclosed, unnamed, or even invisible episodes within artistic endeavour, the various tipping points between thinking and action. Falling. Artistic Labour. Over and over, beginning again and again, repeating gestures, not for the perfection of a given move but rather moves towards deeper understanding.

Cocker and Thornton are currently developing a series of exhibitions and performances of The Italic I to be presented 2014 – 2016 at: Project Space Plus, Lincoln (November 2014), Tertulia, Bristol (2015) and Bonington Gallery, Nottingham (2016)

Forthcoming:
We are currently working on a book chapter entitled "The Italic I: Towards a Lexicon for Reflecting on the Arc of Falling" for the publication Fall Narratives: An Interdisciplinary Perspective (eds.) Áine Larkin and Zohar Hadromi-Allouche. The chapter develops the concerns of the paper we presented at the conference of the same title in June at the University of Aberdeen.