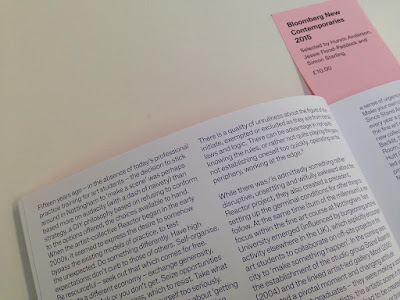 I have been commissioned to write an essay for the exhibition catalogue for New Contemporaries 2015 which will launch in Nottingham in the Autumn. The text explores the affordances of being an emerging artist in Nottingham. As part of the research for this text I have been involved in a series of conversations with various individuals -  Matt Chesney (Director of Backlit); Niki Russell (artist, Programme Curator at Primary, co-founder of Reactor), Candice Jacobs (artist, co-founder of Moot and One Thoresby Street), Tom Godfrey (director of TG, resident gallery at Primary, co-founder of Moot), Joe Rowley (artist and co-founder of Hutt Collective, resident gallery at Primary), as well as current fine art students (participating as studio-assistants in Summer Lodge, a 2-week residency in the NTU fine art studios)

The catalogue will be published for the launch of New Contemporaries in Nottingham (September 2015), but in the meantime here is an extract of my text, On Making, Making it and Making a Scene:

“[...] Focus on making, rather than making it. Make time; make do; make believe; make light of; make light work of; make the most of. Make up one’s own mind. Make one’s (own) way. Make tracks; make sail, make waves. Make a difference. Make an entrance (however small). Make ends meet. Make a virtue of necessity. Make a day of doing, but make haste slowly. Make some fun, for all work and no play makes Jack a dull boy. Make great play of, but don’t just make the right noises. Don’t just be on the make. That inroad or advance made is often at another’s expense. Remember, as you make your bed so must you lie. Heed that empty vessels often make the most sound; that one swallow does not a Summer make; that hope deferred makes the heart sick. So, make a go of it. Make oneself conspicuous: make mischief; make the dust fly. Make heads swim. Make hair stand on end. Make conversation. Make friends not enemies, for many hands make light work. Make common cause. Make something out of nothing. Make it worthwhile. Make no apologies. Do what makes you tick. Make the scene. Make a scene.” Full text below.