Commonwealth (The Shimmering of the Tipping Point)

Over the last few months I have been working with artist Katie Davies in conjunction with her residency at Sheffield Town Hall. On Thursday 5th February Katie will be screening her new film, Commonwealth - produced during this residency - at the Showroom Cinema, followed by a launch of the work and exhibition in the Town Hall itself. 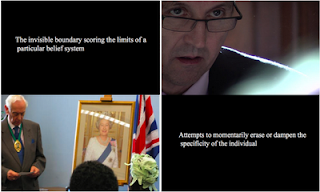 Image: Emma Cocker in collaboration with Katie Davies, Commonwealth  (The Shimmering of the Tipping Point), plans for online video/text work.
Katie's video work in the Town Hall is accompanied by a text work which I have produced as a response to the work, as well as an essay. The text attempts to operate dialogically with the video, providing triggers through which further speculation about the work might be provoked. Following the exhibition Katie and I will be producing an online work which attempts to bring the video and text work together in order to create random moments of collision and connection between the images and writing.
The Shimmering of the Tipping Point
(extracts from an essay)
1. Between the events of the past and a future way of being
2. The pivot about which things turn
3. The precarious authority of tradition
4. A gesture of tilting that sets in motion
5. Where they remain equally present
6. Others are relinquished, forgotten or are cast aside
7. A space to be treated with caution
8. However anachronistic the pledges might seem
9. A code of conduct for ensuring a smooth passage through
10. Functions to remove or limit certain rights and privileges
11. A method for managing instability
12. Assume their place within the agreed order
13. Attempts to momentarily erase or dampen the specificity of the individual
14. Become little more than empty gestures
15. The presence of latent societal values
16. No longer and not yet classified
17. Existing rules and hierarchies become reinforced and sustained
18. Where one thing suddenly slips into or becomes something else
19. The future has not yet begun
20. The continuation of common values and beliefs
21. Suspended at the point of anticipation or of preparation
22. Perpetually tuning up and ever maintaining readiness
23. Before an allegiance is pledged
24. Begin to operate within a mysterious choreography
25. The invisible boundary scoring the limits of a particular belief system
26. Remain hanging in the balance
27. A necessary part of any process of decision-making
28. The moment at which a decision is made or an opinion changed
29. As it hovers at the point of collapse
30. What it might mean to belong
31. When the mask of duty or anonymity momentarily falls
32. Laughter fluctuates between derision and affirmation
33. Any decision involves a gesture of renunciation or rejection
34. Where a group becomes frayed at the edges
35. Before a definitive choice has been made or a fixed stance taken
36. Termination of one trajectory of possibilities in favour of another
37. Narrative silently ruptures the surface of proceedings
38. The quiet reminder of what is actually at stake
39. Endeavour to support an existing order or keep things in their place
40. An inevitable period of instability and unruliness
41. They must follow the rules and offer their pledges and promises on cue
42. Without which they could lose their power
43. Simultaneously inside and outside
44. Inevitably creates that which it seeks to control
45. Not wholly knowing how to respond
46. The point at which things begin to waver
47. Devoid of specific purpose or functionality
48. What is to be gained, what forfeited or lost
49. Not experienced in the same tenor
50. Before order is returned

My paper 'Beating the ‘Invisible’ Boundary: Navigating the space in-between' has been accepted for the Aberystwyth University Living Landscapes conference, June 18 - 21, where there will be papers, presentations, performances and workshops from artists and scholars from the fields of performance, geography, archaeology, fine art, folklore studies, anthropology and literature.
Click here for more information about the conference.

Focusing on projects such as Heath Bunting’s BorderXing and Status Project, and the collaborations between Blast Theory and the Mixed Reality Research Laboratory (Nottingham), my intent is explore the critical function of the artist as both a guide or broker to the indeterminate geographies emerging between virtual and 'real' landscapes. Such practices articulate a performative crossing of physical or spatial boundaries, played out at the terrain vagues ‘betwixt or between’ the real and virtual; the visible and invisible; the physical and psychological. Making conceptual reference to the mythical figure of Hermes - god of gaps and thresholds, of boundaries and travelers who cross them – I am proposing to position the artist/wanderer as a disruptive and resistant (mis)guide to the nascent and unstable territories that are emerging between physical landscapes and digital worlds.

The following paper has been accepted and will be published in a guest-edited (and peer reviewed) issue of the Journal of Writing in Creative Practice with the subtitle of writing encounters in performance and pedagogical practice. The issue is co-edited by Dr. Susan Orr and Claire Hind from the Faculty of Arts at York St. John University. It will explore writing and performance for artists, writers, critics and academics, and has been informed by the Writing Encounters Symposium which took place at York St John University 11th – 14th September 2008 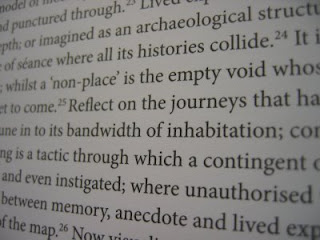 “The paper is beautifully written and was a joy to read … a wonderful and articulate essay. Insightful, academic and creative, detailing a fascinating project… of very high standard and contributes significantly to the field.” Reviewers’ comments

Pay Attention to the Footnotes
Drawing on my experience of working in collaboration with the project, Open City, in this article I reflect on how this close encounter with a performance practice has enabled a critical shift within my own approach, from a mode of writing about to one of writing in dialogue with or alongside performance. Focusing on this dialogic encounter between writing and performance, I want to draw attention to a specific form of writing encounter within performance that emerged as a result of the collaboration. Open City is an investigation-led artistic project – led by Andrew Brown and Katie Doubleday - that explores how public space is conceptualised and organised by interrogating the ways in which our daily actions and behaviours are conditioned and controlled. Their research activity involves inviting, instructing or working with members of the public to create discreet interventions and performances, which put into question or destabilise habitual patterns or conventions of public behaviour. In 2007, I was invited by Open City to produce a piece of writing in response to their work for a series of publicly distributed postcards, and have since worked more collaboratively with the project on a phase of research investigating how the different temporalities within the public realm might be harnessed or activated creatively, and how movement and mobility affect the way in which place and locality are encountered or understood. In this article, I reflect on how different forms of writing – specifically the series of postcard texts - have performed in response to the work of Open City, focusing in particular on the use of footnotes and the different concepts conjured by the word. Rather than operating in their habitual role as the maligned referencing system of academia, footnotes are one of the ways in which the different temporal possibilities of writing have been explored and exploited within the project; as a creative and critical device for producing points of slowness and blockage within the act of reading, or alternatively as a form of performative invitation that encourages both textual and physical wandering by proposing tangents that demand to be – both literally and literarily - followed.

My paper 'Fail and Repeat' has been accepted as part of the fifteenth annual Performance Studies international conference which will take place in Zagreb, Croatia, June 24-28 2009. The theme of PSi # 15 is MISPERFORMANCE: Misfiring, Misfitting, Misreading. More information about the conference can be found at http://www.psi15.com/ 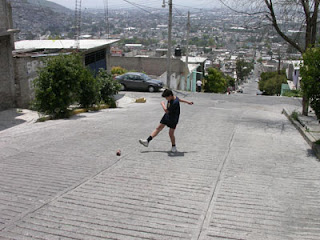 Image: Francis Alÿs, Caracoles
Abstract: Endless actions. Illogical quests. Misguided tasks inevitably doomed to fail or recursively performed – over and over, again and again. In diverse conceptual and post-conceptual art practices and performances, an artist appears locked into some hapless or hopeless endeavour – the repeated demonstration of a fall or failure, hide-and-seek games using the most infelicitous form of camouflage, the futile pursuit of impossible or undeclared goals. Referring to work by artists including Bas Jan Ader, Francis Alÿs and Vlatka Horvat, I want to explore a specifically Sisyphean model of failure, dysfunctionality and inoperativeness within artistic practice. I propose to move beyond an absurdist understanding of the Sisyphean paradigm towards an affirmative reading where the loop of repeated failure is actively performed as a generative or productive force, or as a mode of deliberate inefficiency through which to challenge or even refuse the pressures of dominant goal-oriented or teleological doctrines, by deferring closure or completion. Here, meaning can be seen to shift from a Beckettian articulation of futility and an individual’s resignation to the rules or restrictions of a given system, towards a form of performative resistance to and eventual displacement of the system’s authority, where its logic becomes pleasurably adopted as the rules of a game which reveal porosity and flexibility within even the most rigid framework. Sisyphean failure and repetition is thus proposed as a model of wilful non-production or open-endedness, inhabited or played out at the threshold between investment and indifference, insouciance and immersion, seriousness and levity. 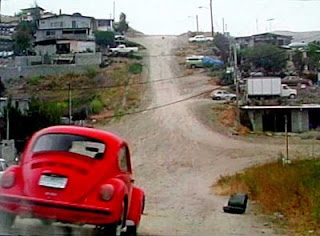 Image: Francis Alÿs
Context
THEME AND RATIONALE
While we want to examine performance as a phenomenon, as experience and a function, a process, a complex and a concept, our aim is to approach it from the perspective of failure, dysfunctionality, futility, and inoperativeness. Misfiring, misfitting, misreading: it is all about the prefix. Misnaming, mistaking, misrecognition – the prefix mis- is always amiss: moreover, it is determined by what follows. There is no misnaming without naming, no misrecognition without proper recognition. Since our broad notion of performance and its possible misfires owe a great deal to Austin’s philosophy of language, rooted as it is in the paradigmatic Western metaphysical dichotomies of play vs. seriousness and success vs. failure, efficiency vs. loss, we are often forced to perceive and value cultural forms and events in terms of binary oppositions. At the same time, modernism embraced the apparently inessential, the misguiding, and the missing as leeway for a new perspective on the very constitution of new cultural systems. On the one hand, the notions mistake and infelicity are deeply embedded in modern western thought. From the Freudian slip via J. L. Austin’s misfires, the Girardian and the Derridean pharmakos/pharmakon and the Lacanian misrecognition, to Goffmanian breaches in the construction of social reality, Judith Butler’s failed gender-performances and Homi Bhabha´s inappropriate signifiers and anomalous representations, scholars have evaluated the irregular, the unforeseeable, and the unaccountable – in a word, the mistaken – as essential to rethinking the categories of what is right, correct, true, whole and serious. On the other hand, by abandoning classical ideas of universality and verisimilitude, modernist art transformed mistake into its enabling limit. From Futurist Evenings and Dada´s Cabarets to Action Theatre, Events, Happenings and Performance-Theatre; from performance art to the postdramatic concept of afformance art, performative aesthetic practices not only intentionally exposed themselves to the risk of accident, excess, and contingency, but also managed to harness their liminality as a normative – even marketable – quality.
Newer Posts Older Posts Home
Subscribe to: Posts (Atom)