I am currently participating in the project 'Essaying Essays'

For three months the Essaying Essays collective will explore the possibilities of the essay form. What forms can the essay take and how can such texts be read? What is an essay and who is essaying and where? What kinds of knowledge can be produced? What is lost and gained in moving beyond conventional discursive approaches into using visual and textual material, the space of the page, variations of typography and design?

Essaying Essays was proposed by David Berridge as one of seven research projects by members of Free Press, a collaborative project between seven artists/ writers exploring economies of ideas and alternative modes of dissemination and exchange. The seven projects developed from a workshop at Plan 9, Bristol in March 2009. Details of all the projects can be found at www.tradeunionartfreepress.blogspot.com

Free Press are David Berridge, Rachel Lois Clapham, Karen Di Franco, Pippa Koszerek, Matthew MacKisack, Sophie Mellor, and Ashkan Sephavand.
My reasons for involvement are as follows:
I have increasingly come to think of the essay as a form of Sisyphean labour, where its etymological origins in the French word essayer - meaning to try, a tentative attempt – are remembered and posited a value. Whilst there is perhaps a danger - even a sense of futility - in thinking about the essay in terms of its potential (indeed inevitable) failure, there is also a certain liberation in acknowledging that the essay is not always about arriving at a definitive conclusion but rather serves, at times, as an act of rehearsal where possibilities become marked, propositions trialed. The tentative, propositional indeed potentially failing possibilities of the essay are something I would like to explore further, as these are ideas that relate closely to my ongoing research that operates under the working title ‘Not Yet There’. In spite of my interests in the provisional, unresolved and incomplete, my writing has often tended to follow the format of established even conventional forms of essay writing, which I freely admit might not always be wholly appropriate to the ideas expressed therein.  In recent work I have become more interested in the form that my writing might take, thinking about how it might function as a practice rather than simply as a structure, vessel or convention for holding together ideas. I have become interested in using strategies of listing for assembling fragmentary or partial sentences and in the conventions of footnoting as a critical and creative device for constructing non-linear (even wandering) text-works. 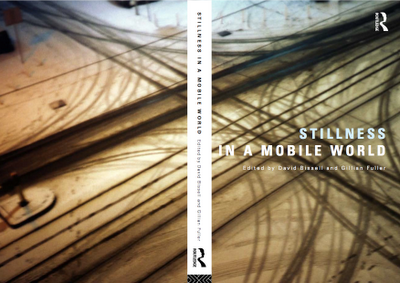 The chapter develops an earlier article ‘From Passivity to Potentiality: The Communitas of Stillness’, published in the peer-reviewed journal M/C – A Journal of Media and Culture, Vol. 12, No. 1, Still, 2009. Its ideas have been tested at various international conferences (including PSi #16 Performing Publics, Toronto, 2010 and Writing, Site+Performance, ANTI festival, Kuopio, Finland, 2011). Related investigations exploring the use of invitations for producing collectivity have resulted in journal articles ‘RSVP – Choreography Collectivity through invitation and response’, published in the peer-reviewed online journal Rhizomes (‘Hives, Tribes, Assemblages: New Collectivities’, 2011); ‘Pay Attention to the Footnotes’, in the Journal of Writing in Creative Practice, 2010; ‘Social Assemblage’, in FrenchMottershead - SHOPS, People and Processes (Site Gallery, 2010), and ‘Permission Granted’ - essay in the online journal, Drain, 2011. The Spinozist notion of affect was further elaborated as part of an invited essay in Reading/Feeling: The Affect Reader, (If I Can’t Dance, Amsterdam, 2013).
Newer Posts Older Posts Home
Subscribe to: Posts (Atom)