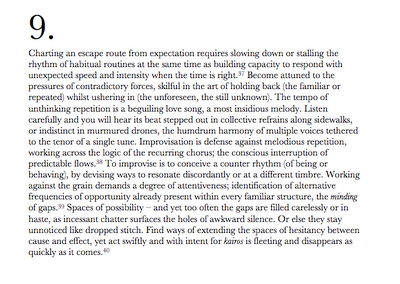 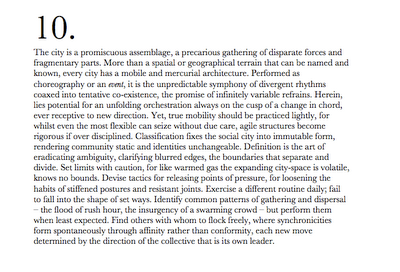 I am currently working with Open City (Andrew Brown and Katie Doubleday) to develop new work to take to Toronto as part of the forthcoming PSi Performing Publics events in June, and also for new festival contexts for the UK in the Autumn. Here are 2 new postcard texts (No.9 and No.10), which will complete the series of cards made in collaboration with Open City (2007 - 2010). We are currently working on a limited edition foldable pamphlet which will be designed by Joff+Ollie, for bringing all ten texts together for the first time, alongside a series of instruction and visual propositions. If you would like a copy of this publication please email emma.cocker@ntu.ac.uk.

I will be chairing this event (below) as part of Art Sheffield 2010 Life: A Users Manual . I hope that this event will provide a space to further tease out ideas which have been emerging in some of my recent writing including Performing Stillness and Performing Collectivity, around the affective experience of collectivity and community (particularly through the prism of Spinoza's Ethics).
In Conversation Event
Saturday 24 April 2pm
Showroom Cinema
Frederique Bergholtz will discuss some of the issues raised by Art Sheffield 2010 ­ Life: A Users Manual. Frederique Bergholtz is a co-curator of Art Sheffield 2010 and director of the rolling platform If I Can’t Dance, I Don’t Want To Be Part Of Your Revolution.
She will be in conversation with participating artist (and lecturer at Sheffield Hallam University) Becky Shaw, following which there will be opportunity for discussion, facilitated by Emma Cocker (Writer and Senior Lecturer, Nottingham Trent University)
Context
The title of Art Sheffield 2010 – Life: A User’s Manual, refers to Georges Perec’s 1978 novel in which he builds up a detailed picture of the inhabitants of a single apartment block by describing the spaces in which they live, the objects in their rooms, the photos and paintings on the walls. There is something to this concentration on detail and the relationship between the individual and the collective that seems timely to explore when we feel as never before, especially with the current crisis, the effects of economic and social pressures on our everyday actions. Attempting to grapple with such global changes and not be overwhelmed by them, venturing to ask ‘where am I in this?’ is where art and the encounters it creates can be most powerful.
A key concern is to explore the notion of ‘affect’. Often used interchangeably with the experience of feeling or emotion, it is essentially an ability to affect others and in turn to be affected by them. Art Sheffield 2010 - Life: A User’s Manual proposes that unspectacular acts of everyday ‘affect’ might be a way to chart a path through current circumstances. Affect, not understood in the romantic sense as the catharsis often promised by art, but as the potential for embodied interpersonal experience which may suggest the next possible step within the bigger picture. 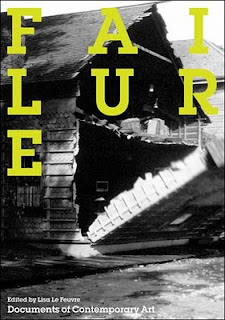 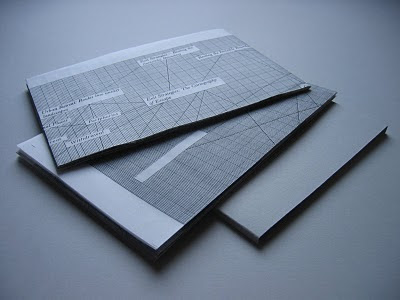 
New text works developed from the recent Art Writing Field Station curated by David Berridge. The work proposes the idea of a portable studio, or rather asks what might be the basis of an art-writing studio made mobile.

I have provisionally been invited to write a critical response to the forthcoming ANTI festival which will be taking place in Finland from September 29 - 3 October. More to follow soon.


ANTI Festival 2010 will focus on textual, written and language-based responses to site specificity. We encourage artists working across a range of media to consider the following areas of enquiry, these include, but are not limited to:
ANTI – Contemporary Art Festival will be held in Kuopio, Finland between Sept 29th – Oct 3rd 2010.ANTI is an international contemporary arts festival presenting site-specific works made for public space. Over the past eight years ANTI has presented live, sonic, visual and text-based art from today’s most exciting and innovative artists. A truly international festival and Finland’s foremost presenter of Live Art, ANTI is a meeting place for artists and audiences fascinated by how art shapes and responds to the places and spaces of everyday life.
ANTI’s emphasis is on site-specificity. The festival understands this term in an expanded sense; proposals may suggest works that deal with a site geographically, culturally or by association etc.


I am interested in the art-work as site; of art-writing as a necessarily site-specific practice with a particular temporal and spatial relation to the context in which it is produced. As an art-writer my practice is often generated at the site of another’s production. The encounter with a site (the space-time of a festival/exhibition, the practice of another) operates as a catalyst for activating a thinking process, within which certain extant ideas and interests become interrogated, brought to the fore. It is through the encounter with another (site/work/thought/word/body) that a particular trajectory of thinking (and of writing) becomes set in motion; that ideas are activated or awoken. Writing is the residue or remainder of a relational exchange, the product of a meeting point between self and other, myself and the world. Rather than an act of criticism that only takes place after the event (from a position of authority, always located elsewhere), I am interested in what it means to write from/within/at the site of practice. Here, the site/context of practice not only refers to the site of the artwork itself, but the apprehension of and engagement with those rather more interstitial spaces of (art) production and reception – the unspoken interval between an artist’s intentions and resultant work, the interaction between art and site, art and audience, one work and another.
My writing practice is not one of reportage or critique but rather an attempt to locate myself in and write out of the space of art practice. One practice becomes grafted into the territory of another in order to generate a new form of production emerging at the suture where the two practices meet. My work is often forced by the germinal conditions provided by external forces or pressures; it attempts to access the logic of another’s practice whilst developing new ideas through a parallel or tangential line of enquiry. Mine is not an attempt to speak on behalf of another, but to write alongside, operate dialogically.
What might it then mean to produce a critical text that is site-specific to ANTIfestival – to explore what might here constitute site? Working on-site at the festival I will generate textual fieldwork/raw material (writing/mapping/diagramming/recording from observations, interviews, encounters and interactions within ANTIfestival) that will inform and form a new piece of writing that explores and performs the specific terms of site-specificity provoked/produced through the festival.
Newer Posts Older Posts Home
Subscribe to: Posts (Atom)