The Shimmering of the Tipping Point

During October and November I was involved in researching and producing a series of pieces of new writing in dialogue with Katie Davies, who was undertaking an artistic residency at Sheffield Town Hall and Persistence Works. Katie Davies' practice investigates manifestations of language, the timing of comedy, and the spectacle of ceremony. For the residency she has proposed to develop a film work that looks at the performative dynamics and procedures based within the meeting rooms, function rooms and Council Chambers. The work will explore conventions of protocol within official, ceremonial and social behaviour that takes place within the Town Hall and will aim to explore the choreography of institutional conventions through the visual language of film. More about Katie's work can be found here 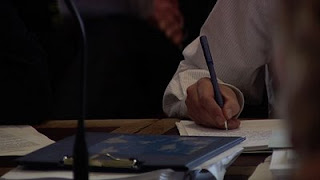 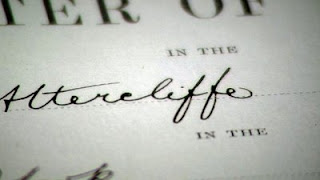 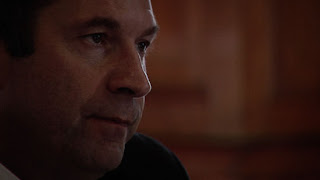 My essay The Shimmering of the Tipping Point explores how Davies' work often explores and attempts to capture the 'shimmer of a tipping point' (the point at which things oscillate or waver), by focusing on the nature of the ambiguous threshold zone between one state and another, or on spaces that are somehow liminal or transitional. An extract can be read below.

"In sociological terms, a ‘tipping point’ describes the moment of a critical turn, the unstoppable momentum of an emergent trend, the accumulation of innumerable minor factors resulting in some form of major – often epidemic or catastrophic – transformation. It is the final straw that breaks the camel’s back; the moment of recognition or realisation that prompts the declaration that enough is enough, that things have gone too far. It can be imagined as the invisible boundary scoring the limits of a particular belief system or moral code, which once breached might force the individual or collective to rise up and make a stand. It has been used to signal the point at which the metaphorical tide turns, the irreversible passing of the point of no return. Here, the tipping point designates a line of separation that distinguishes between the events of the past and a future way of being; it is the threshold where one thing suddenly slips into or becomes something else. However, tipping points can also be experienced at an individual level as those daily yet often imperceptible shifts and transformations that form part of the fabric of lived life. The term can be used to describe the moment at which a decision is made or an opinion changed; or the threshold crossed when you realise that you are no longer a child. In these terms, the tipping point is not experienced in the same tenor as that of the sociological model - as a clear or abrupt cut between one state and another – but can be understood instead as a pivot about which things turn; as a gesture of tilting that sets in motion. It is that which creates the interstice between one thing and something else; an interval of reflection that momentarily holds two or more possibilities in the balance where they remain equally present. Here then, the tipping point inevitably produces a zone of potentiality or ambiguity, a period of instability and indecision before a definitive choice has been made or a fixed stance taken. This is the shimmering of the tipping point, the point at which things begin to waver".
Extract from the essay 'The Shimmering of the Tipping Point", which will be published by Yorkshire Arts Space. 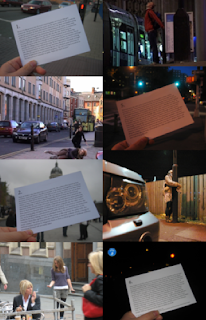 A photo-essay of documentation from a recent project in which I worked in collaboration with Open City  is going to be published in the forthcoming issue of Drain magazine focusing on ‘Psychogeography’. The work will be displayed online as a slide show of still images in the Art Projects section of the magazine. A series of postcard instructions and the serialised essay (viewed as postcards in use in the public realm) will provide a critical structure for the photo-essay, which will also include documentation of collective actions undertaken as part of the project.

During September I was in Japan with Katie Doubleday from the Open City project for an Arts Council funded research trip, which extends the work I have recently been doing in collaboration with Open City. This will be a short joint investigation-led phase of research where I will be working further with Open City to explore notions of slowness and stillness, in order to ask questions about how space is conceptualized and organised, and examine the ways in which our daily performances are conditioned and perhaps even controlled. As part of this research phase we presented a paper at the Constructing Place symposium, which was part of the Dislocate festival in Yokohama. For our visit to Japan we also produced a number of new postcards, which presented a specific instruction relating to slowness or stillness on one side, and on the other part of a serialized essay in which I extended ideas from an earlier text I had been commissioned to write for Open City. 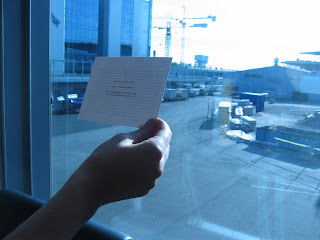 Within this phase of joint research we are interested in how both the shape and speed of our encounters with the world - and engagements with a given place or location- are often subjected to a kind of standardisation, where individual action is increasingly managed according to a regulated template - an agreed and endorsed temporal and behavioural pattern which we are then perhaps put under pressure to inhabit. We are interested in exploring ways of introducing flexibility, porosity or even moments of contingency into situations where our options for individual ‘performance’ might appear rather limited or predetermined, and in finding ways of creatively testing-out or playing with the expectations and demands of existing situations, suggesting ways in which they can be inhabited in different ways. 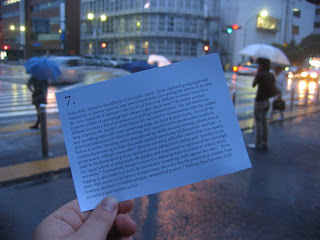 Our research trip to Japan was part of a period of joint research where we collectively wanted to further explore the possibilities of the different temporalities at play within the public realm, and to examine how movement and mobility might affect the way in which place and locality is encountered or understood. We were both interested in how different behavioural or performative speeds can be drawn attention to or inhabited, as a way of somehow resisting the pressure to perform or behave in homogenised ways. Our joint research as part of this phase of the project attempts to explore (quite speculatively) how moments of slowness, stillness, obstruction and blockage can be investigated to create points of anchor and location within the urban environment, affecting both a psychological and critical shift in the way that space is perceived. 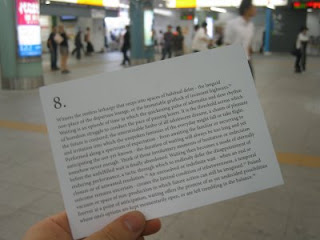 At one level the dislocate festival provided a context in which to further consider the role of technology and new media in relation to these ideas – a frame of reference within which to think about the complex and often contradictory relationship between temporality, technology and the body. In one sense, technology has almost unquestionably come to be associated with the notion of accelerated speed and increased velocity, and has then often been discussed in terms of disembodiment and dislocation. In contrast perhaps, the temporal patterns of the body or of the physical world are frequently framed as operating naturally according to a slower pace where such slowness or even stillness is synonymous with or equated to an idea of embodiment and locatedness. Within this research we wanted to explore the point where the logic of these seemingly binary positions begins to collapse or blur, in order to ask whether certain technologies might in fact enable or even legitimise subversive or disruptive forms of performed slowness and stillness, and how, under scrutiny, these slower modes of spatial inhabitation can be revealed as a sites of perpetual and shifting meaning - where stillness is in fact rarely ever still. 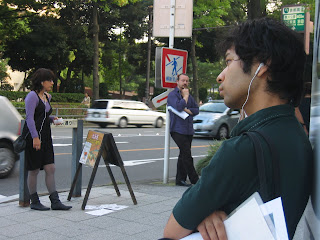 In our presentation for dislocate we wanted to test how spoken word and instruction (presented to participants using i-pod technology and wider publics through postcard texts) make it possible for different ideas and propositions to explored within the act of stillness itself, in order to invite physical, conceptual and imaginative engagement with the work. We wanted to explore notions of agency, authority and intention within the act of stillness. Through the use of the i-pods and spoken text (see image), we interrogated how the act of ‘being still’ might shift in meaning as it moves from or between different positions - ranging from a form of stillness experienced as a controlling or restrictive mode of enforced waiting; as a hopeful state of anticipation or of expectation; as an act of resistant refusal or protest; as a posture for quiet observation; as a tactic for disappearing or becoming invisible/unseen; as a ludic form of game-play; or as a site for contemplation or idle daydreaming.
Newer Posts Older Posts Home
Subscribe to: Posts (Atom)