My text Live Notation: Reflections on a Kairotic Practice, a response to my encounter with the work of the Live Notation Unit at Arnolfini Gallery on  27th July 2012, has been selected for development as part of a forthcoming issue of Performance Research Journal, issue Vol 18, No.5. 'On Writing and Digital Media' (eds.) Ric Allsopp and Jerome Fletcher.


Background to Performance Research issue Vol 18, No.5. 'On Writing and Digital Media', edited by Jerome Fletcher with Ric Allsopp

Although the emergent field of digital writing is rife with references to performance, they remain relatively untheorized. Certain theorists such as N. Katherine Hayles have insisted on the inherent performativity of digital text: ‘Less an object than an event, the digital text emerges as a dance between artificial and human intelligences, machine and natural languages as these evolve together through time’. But in the main, analysis or investigation of performance is restricted to the relationship between the text output (on the interface or projected into a performance space) and the live body either responding performatively to that text, or else generating text through performance. There has been little attempt to enfold an understanding of digital text performance within the wider context of the ‘turn to performance’ that has taken place among the humanities in recent decades. It is against this background of performance studies, ordinary language philosophy and speech act theory, the ethnography of ritual, the performance of self and gender, and performance writing, that this issue of Performance Research will interrogate how writing performs in digital media.

While not excluding the investigation of live performance and its relation to digital writing and texts, the issue seeks to broaden the scope of the inquiry to include: interactivity between digital language and the body; the performative gesture(s) of the hand and fingers (digital text) on the interface; the performativity of language itself on the screen; social performance or how digital texts ‘perform’ us; the performance of codes and scripting; machinic performance, i.e. what does the engineer mean by performance.

In other words, we will be looking at the different modes of performance as they are manifest across the whole digital environment (dispositif). In order to give a fuller account of this complex of performative modes, we will also be investigating how they interact and collaborate with each other.


Below is a text produced from my experience of being a Seer-in-Residence’ at the invitation of Traci Kelly, in response to her exhibition of mono-prints collectively entitled Feeling it for You (Perspective).

Publication: On Not Knowing 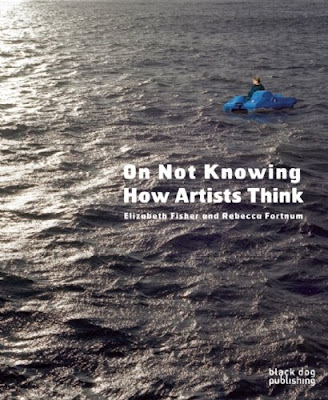 I have been invited to contribute a chapter to the forthcoming publication On Not Knowing: How Artists Think, (eds.) Rebecca Fortnum, Reader in Fine Art, University of the Arts London and Lizzie Fisher, curator, Kettle's Yard, Cambridge University, (Kettles Yard, 2013)

The publication On Not Knowing: How Artists Think will draw together a number of contemporary thinkers from a range of disciplines along with artists to explore the place of ‘not knowing’ within the creative process.   It is conceived as an examination of the subject through practice and theory and will include both written essays and artists’ projects. The state of ‘not knowing’ or engaging with the unknown is a clearly acknowledged important aspect of all research. For artists it is crucial, as during the making process they may move between a strong sense of direction and a more playful or meditative state of exploration and experimentation. Within this process a sense of not knowing what it is they are doing can be as important as clear intentions.  The book will examine states such as ignorance, wonder, awe, potential and recognizing the new, as well as reflect on how artists formulate strategies of not knowing and ‘play’ within their decision making process. Contributors include Professor Gary Peters (York St John), Associate Professor Rachel Jones (George Mason), Associate Prof Neal White (Bournemouth) and Dr Jyrki Siukonen (Finnish Academy) as well as artists Cornford and Cross, Sonia Boyce, Ian Kiaer and Phyllida Barlow. The publication builds on a symposium held at the invitation of Kettle’s Yard, to accompany the exhibition Material Intelligence in 2009.

For my contribution to On Not Knowing: How Artists Think  I am envisaging a creative prose text that elaborates and reflects on a series of propositional practices or tactics for producing the conditions of not knowing. Excavating ideas from some of my recent research and practice, I want to explore how the state of ‘not knowing’ or the practice of engaging with the unknown is an important aspect of all research, but is also one that might often need to be actively courted, conjured or produced. I am interested in methods (tactics even) that attempt to set up the conditions of not knowing or which actively attempt to stall or suspend the moment of knowing, of decision, or the fixing of things into form or thought. I anticipate that the text will consist of a series of episodes or sections that elaborate and reflect on a different practice or tactic for producing the conditions of not knowing.


* Ideas relating to the desire to be led astray – wandering, errancy, getting lost, misdirection, the principle of the maguffin
* Tactics for encountering the unclassified – ways of producing an encounter with that which is beyond the comprehensible, a move towards opacity and the ‘incomprehensible wild’.
* Practicing the fall from knowing: surrendering to the fall & the not knowing of syncope.
* The conjectural: tactics for distancing the ‘if’ and ‘then’.
* Chance and the paradoxical ‘not knowing’ within rule-based operations; the giving over of agency in order to be surprised.
* The fragmented and fragmentary as states of not knowing
* Techné - between cunning (metis) and opportunity (kairos): improvising tactics for navigating the not yet known.

Event: Where does thinking/making happen? 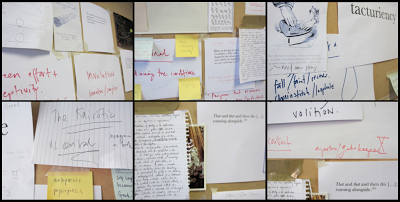 Presentation as part of an event Studio/Situation, where members of the fine art team at Nottingham Trent University were invited to respond to the question, “Where does making & thinking happen within my practice?” or else perhaps ‘Where is my studio?” Building on recent discourses examining the role of both studios and situations within contemporary art practice, the event examined different perspectives and strategies relating to where (and how) artists make and think.
As part of this presentation, I addressed the important of my own studio as a space for endless reassembly, making and unmaking, where ideas are never resolved as such but endlessly revisited and rewoven. 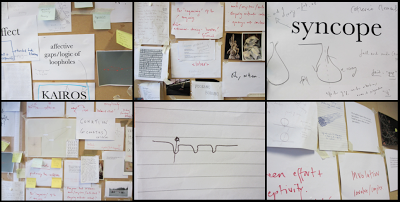 I am interested in Penelopian labour (the weave and unweave of a practice) - the doing and undoing; the holding of ideas together, and their disassembly, recombination. For me, studio is where piles of books are endlessly resorted, re-stacked, a place for shuffling ideas and works. Studio thinking is unfixed, an ever-turning over; always dissolving or collapsing before it ever gets too certain or sure. Once again, I return to a quote from Luce Irigaray when I think of my own use of a studio, where the search seems less for fixed and definite 'thoughts' and 'forms', but rather for that illusive "'other meaning' which is constantly in the process of weaving itself, at the same time ceaselessly embracing words and yet casting them off to avoid becoming fixed, immobilised". 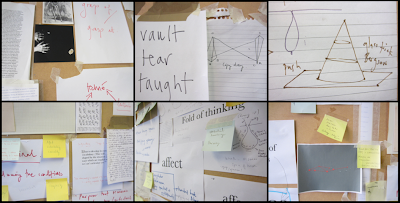