My interview with artist Lucy Harrison has been published in the issue of Drain Magazine which is focuses on the theme of Psychogeography. The interview was initially undertaken as part of my research for the article, The Art of Misdirection.

Psychogeography: background to the issue
In 1955, Guy Debord described psychogeography as “the study of the specific effects of the geographical environment, consciously organized or not, on the emotions and behavior of individuals.” Debord’s psychogeographical map The Naked City (1957) challenged traditional ideas of mapping relating to scale, location, and fixity, and drew on the work of urban social geographer Paul-Henri Chombart de Lauwe’s concept of the city as a conglomeration of distinct quarters, each with its own special function, class divisions, and “physiognomy,” which linked the idea of the urban plan to the body. An important strategy of the pyschogeographical was the dérive, “a technique of transient passage through varied ambiences”. The ‘psychogeographical’ has had a pervasive if somewhat amorphous role in contemporary art and culture. As a creative, social and political tactic, wandering through psychogeographic spaces is pertinent to a diverse range of practices including the use of GPS systems, Internet art, photography as well as sound and performance art. This issue of Drain attempts to gather a series of essays, artworks and creative writings that reflect on the current state of psychogeography. How have contemporary artists, writers and thinkers interpreted, or been influenced by, the legacy of psychogeography?

PSi #14 INTERREGNUM- In Between States

See http://www.interregnum.dk/ for the context for this conference
PSi # 14 conference in Copenhagen 2008, August 20-24 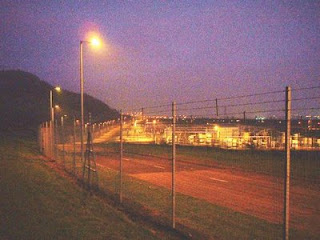 "Beating the 'Invisible' Boundary: Navigating the space in-between" is a paper I presented as part of the PSi conference #14 INTERREGNUM- In Between States, at the University of Copenhagen in Denmark from 20 - 24 August. INTERREGNUM is a term designating the exception, traditionally the period in between monarchs, but in a wider sense any state of disorder and discontinuity. INTERREGNUM thus does not only apply to a temporal break, but also to spatial in betweens or terrain vagues as well as to social and psychological states of exception. As a metaphor INTERREGNUM further refers to that which is in between disciplines, that which is interdisciplinary, postdisciplinary or simply ‘undisciplinary’. To investigate Interregnum of our present condition is to ask not about the fixed state of affairs but about the gaps between. Interregnum as concept will guide the PSi conference and focus attention on the brief moments of instability or surplus that exist between two sets of conditions. We ask what shapes the transition from one phase to another, what initiates a change in perspective and perception. For each of the three main days of the conference we choose a subtheme for inquiry that relates to Interregnum. The subthemes are:In Between States of Spaces/Geographies; In Between States of Disciplines; In Between States of Subject/Body. My paper was proposed as part of the strand - In Between States of Spaces/Geographies which deals with the upcoming of new spaces of belonging and of changing geographies. We wish to discuss how the concept of the nation state worldwide is challenged by both regionalism and globalism. New conceptions of both place and space are coming into effect as a result of these changes. How are our concepts of place and space, of belonging and longing, affected by the ongoing negotiation of ‘borders’? How does ‘place’ connect to spaces of identity? How is visual culture and imagery in general mobilized to reinforce ideas about belonging within changing and unstable geographies? How are we made to look upon ourselves as simultaneously situated and disconnected subjects? The concept of Interregnum addresses relationships and exchanges between cultures, changing geographies, and changing spaces. 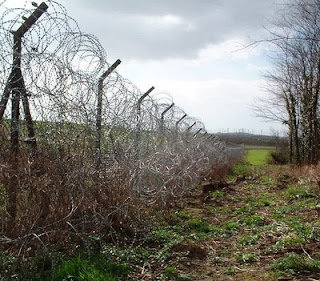 Beating the 'Invisible' Boundary: Navigating the space in-between
"In this paper I want to explore how certain artistic practices appear to tactically inhabit or play out a particular state of exception in order to then reveal, resist or even critique the increasingly limited or restrictive terms by which society and space are organized and controlled. New types of interactive and increasingly pervasive technologies are irreversibly transforming our understanding of public and private space, simultaneously delimiting and monitoring known environments, whilst creating newly imagined territories at the interstice between the real and virtual, the visible and unseen. Our engagement with the world is now shaped by and often mediated through the logic and order of invisible infrastructures whose influence and reach is difficult to discern. Whilst undeniably useful at times, these various locational, informational and observational technologies reflect a cultural context in which the desire to determine an individual’s whereabouts and scrutinize their daily (trans)actions has become both a private and political preoccupation. In one sense it is possible to read the increased and ubiquitous use of networked surveillance technologies, and the surreptitious monitoring of individuals’ actions through such technology as symptomatic of a more general extension of the structures of power and control used by governmental agencies in supposed times of crisis - the paradoxical infringement of civil liberties framed as a form of necessary state security. Giorgio Agamben refers to these increased extensions of power as states of exception, where individual rights can be diminished or even rejected at the authorization of a government during a state of emergency. Agamben goes on to explore how these so-called provisional or interregnum strategies can easily slide into prolonged states of exception, which can be then used to strip certain individuals of their rights to citizenship, reducing them to the status of Homo Sacer, a person who exists in law in a perpetual state of exception – a non-person, an exile, a declassified state. The terms of Interregnum thus afford curiously contradictory possibilities as the suspension of habitual rules and legislation has the paradoxical potential to both liberate and further enslave – where the capacity for an extraordinary increase in the authority of the structure is often exponentially, inextricably related to a diminishment of an individual’s power or agency. In this paper, I want to begin to explore how certain artists appear to upset the inevitability of this equation by attempting to disrupt or invert its rules, often using technology in order to playfully exploit the grey areas and loopholes between physical and virtual worlds. There are artists who appear to tactically recuperate the possibility of critical value or political agency within the individual state of exception itself – by momentarily inhabiting the liminal position of the wandering exile or by becoming invisible, as a way of drawing attention to, undermining or questioning the logic and authority of the system. Here, an individual state of exception is transformed from a punitive measure into an affirmative (or at least resistant) space of inbetweenness, exemption or even liminality that can be creatively inhabited – where the notion of exile is recuperated as a mode of wandering or of wilful unbelonging".
Newer Posts Older Posts Home
Subscribe to: Posts (Atom)