I have been commissioned to write an essay for Steve Dutton and Steve Swindells for a publication developed from their current International Residency at Ssamzie Space, Seoul South Korea 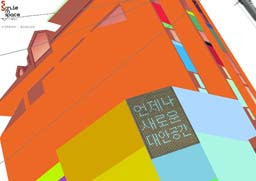 Steve Dutton and Steve Swindells have worked together on projects since 1998. Recent collaborative projects include “The Dog and Duck” at Kookmin Art Gallery, Seoul, ‘Emergency 2’ at Aspex Gallery, Portsmouth U.K, ‘Folklore’ at APT, London U.K. and ‘Txtrapolis’ at NAFA Gallery, Singapore. They have produced a number of books and publications, most recently, ‘Misleading Epiphenomena’, co-written with Dr. Barbara Penner, which was published in 2005 by Artwords Press.
"Our practice is self-consciously contradictory. Contradictions are a means to an end; they force a loop , which is neither open nor closed but united by a sense of expectation and delay of resolution. In turn, this delay allows something to be understood differently, indeed, it allows the very concept of understanding to be understood differently. We are tactical artists, frequently doubling, collaging, reversing and inverting found images, objects and texts with no restrictions on media. By consciously working through varied rhetorical devices and tropes, modes of production and strategic interventions we create installations and works which are both critical yet, necessarily, playful. Our aim is to disarm; to render an image, form, space or text, momentarily impotent and open (or indeed, vulnerable). In turn, this impotency opens up a reflective space in the experience of the thing which is implicitly, and sometimes explicitly, critical of power relations and expectations invested in it. The work is marked by tensions and lesions created within the conflation of faltering subjectivity and attempts toward a self -reflexive critical rigour" Duttton and Swindells. See http://www.steve-dutton.co.uk

I will be chairing and undertaking specific research in relation to this event, organised by my colleague, Frank Abbott
For more information Click Here
Performing Space
Friday 22 February 2008
Nottingham Trent University School of Art and Design
Throughout the world new types of communication networks based on wireless interactive ICT technology are transforming our understanding of contemporary public and private space.
They are increasingly being explored by live media artist projects through events like the Radiator Festival (Nottingham), First Play Berlin and Dis-locate (Tokyo). Within other humanities subjects like geography, architecture and social urban planning new insights into the changing nature of public space are being addressed . The research aim of this hybrid workshop is to bring together a range of humanities researchers and artists to examine how the common ground between these disciplines can be developed through examining ICT wireless network strategies borrowed from the work of artists; and conversely how the development of research, particularly in the areas of geography and architecture, can inform the artists` research and development. Arising from the hybrid event will be an account of where related disciplines of geography, architecture and potentially others can collaborate with live media artists and community cultural agencies in ICT led projects. The event will investigate how the outcomes of artist practice can pioneer new areas of engagement. This will specifically be in relation to understanding the technological changes affecting the nature of space in the contemporary environment and the value of engaging in such ICT led research activities.

I am hoping to develop ideas from the symposium into a paper which explores the practice of artists against the foil of the myth of Hermes. See posting on PSi 14: Interregnum: States in Between here

Provisional Statement
I am involved in developing a research cluster at Nottingham Trent University, whose working title is ‘Still Unresolved’. The group is concerned with exploring the relationship between uncertainty, irresolution and failure to contemporary art practice. It seeks to examine how artistic practice might be framed as a temporal site of rehearsal and potentiality or alternatively as space for irresolution and doubt; by asserting a critical value for moments of provisionality or contingency within art practice and by placing emphasis on the forms of knowledge and research located at the level of process or the performative within the act of making. Whilst accepting the integral presence of these concerns as an implicit part of making work within most creative practices, in this context they become foregrounded as the focus of research, scholarly activity and practice itself, where they become strategically emphasised or explored at a level of subject, methodology and form. We envisage that research may take the form of network development, publications, curated exhibitions and symposia