I am currently facilitating a reading group at Site Gallery around the notion of Affect.
Affect Readings @ Site Gallery, Sheffield
Thursday 19 April 2012, 6pm onwards
Affective Labour & the Politics of Witnessing
The last reading group session opened out into an interesting discussion for wrestling with the possibilities and also the more problematic aspects of Alison Landsberg's notion of prosthetic memory. The next session extends the dialogue around the notion of affect further, by shifting attention towards affective labour and the politics of witnessing. These ideas will be explored through the prism of two texts: Michael Hardt’s Affective Labour and Jan Verwoert’s You Make Me Feel Mighty Real: On the Risk of Bearing Witness and the Art of Affective Labour.

Below is my review of the current exhibitions by Hanne Darboven and Raphael Hefti at Camden Arts Centre, an edited version of which is in the next issue of Frieze magazine here.

"Refusing the curatorial convention of the two-person show, Camden Arts Centre’s staging of simultaneous solo exhibitions nonetheless generates points of resonance and echo between artists paired. The recent coupling of the late German conceptual artist Hanne Darboven with the young Swiss artist Raphael Hefti was no exception, not least since (remarkably given Darboven’s almost half-century career) it was the first UK solo exhibition for both artists. An unlikely match at first glance, Darboven and Hefti’s work develops from sustained engagement with process, procedural techniques or methods repeated over time. Both adopt seemingly logical, technical, even routine means of production but then pressure these beyond their habitual limits until they fold or buckle, yield under the strain. Hefti’s is a nascent material investigation that attends to the potential of mistakes and misfires within commercial manufacturing processes, moments of productive error that result in material behaving unexpectedly, against intended function or utilitarian demands. Replaying the Mistake of a Broken Hammer (2011) repeated Hefti’s experience of accidentally interrupting the process of hardening steel, willfully rendering three large steel rods fragile as glass. Subtraction as Addition (2011) consisted of seven propped panels of toughened museum glass, treated (again and again) to a chemical process designed to limit undesirable reflection. Hefti’s over-application of this process inverts its original intention turning the glass mirrored and opaque, a palette of exquisite and ever-changing dawn and dusk hues. Within his work, standard factory methods are swerved towards aesthetic enquiry. 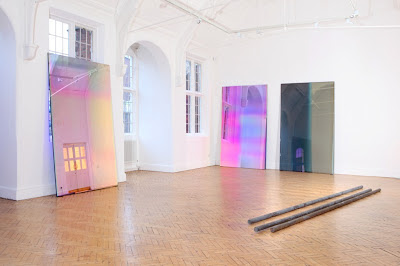 Darboven’s practice is one of adopting, yet somehow resisting the logic of various systems or structures. Whilst numbers figure within her work, mathematics itself is eschewed. Writing is undertaken as a form of not writing, her act of ‘writing writing’ preempts subsequent performing writing practices where as Della Pollock states, ‘writing as doing displaces writing as meaning’.[i] Darboven’s work has been described as marking or doing time performed through the act of daily writing. However, unlike other life-work projects (On Kawara, Roman Opalka) Darboven’s endeavour seems less about the chronological passage of life/time witnessed by and within practice, as a critical enquiry wherein time itself is considered material to be looped and folded, stretched and frayed. The exhibition presented a chronological sample of Darboven’s methods and working vocabulary, from her early mandala-like interventions on graph paper (Perforationen, 1966) and rehearsing of cursive script (O.T. [Endlosschriftschwünge – Studie zu "7Tafeln II"] 1972) to the acoustically pervasive 24 Gesänge opus 14,15 a, b (1984) in which she converted her numerical drawings into a musical score whose rhythmic variations were then played on an organ. Darboven often borrowed the calendrical form of diaries, year-books and work plans as a found template or grid through which she weaves the experience of multiple and conflicting temporalities. For example, Appointment Diary (1988/98) took an American Film Institute desk diary as its underpinning structure, its linear chronology already interrupted and punctured with film dates, the births (and deaths) of innumerable directors and actors. Darboven creates further slack and elasticity through her simultaneous filling and emptying of its time; its pages scored day after day with cursive handwriting, interpreted variously as the looping repetition of ‘I’ (of ‘present-ness’) or of ‘U’ (‘und’ – the accumulative promise of ‘and … and … and …’). 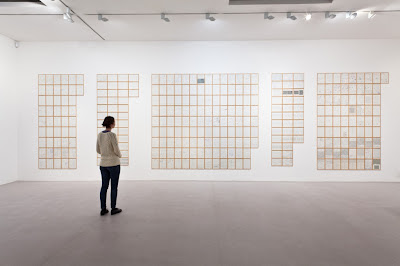 The experience of Darboven’s work can be overwhelming: even the moderate 305 drawings of 9 x 11 = 99 (1972) felt dizzying and impenetrable, a shimmering field of dense numerical calculations and indecipherable scrawl. The work tested out various permutational methods that would later come to characterize her work, including the formulation of the cryptic ‘K’ (Konstruktion) value, based on a cross-sum adding together a date’s constituent parts (e.g. 23.9.71 = 23 + 9 + 7 +1 = 40). The use of such organizing principles within Darboven’s practice does not generate a logic that can be rationally explained rather she produces a surplus of order that borders on the disorderly or irrational. Her example might well have provoked Sol LeWitt’s oft-cited sentence on conceptual art, ‘The logic of a piece or series of pieces is a device that is used at times, only to be ruined’.[ii] In some senses, the curators over-played the human endeavour of Darboven’s labour, presenting her drawing desk and writing implements as potential entry points into her very complex and involved (involuted) oeuvre. However, whilst the critical potency of Darboven’s practice rests in its resistant incomprehensibility or opacity – its refusal to be easily interpreted or explained – the deficit of engagement with her work in the UK perhaps suggests that some introduction of this kind might still be deemed necessary."

I am currently facilitating a reading group at Site Gallery around the notion of Affect.
Week 3 (22 March 2012), 6.00 – 7.30pm
Affect and Memory: the possibility and problematic of prosthetic memory
Continuing the exploration of the affective fragment or ‘refrain’ (following Guattari), the next reading group session addresses the relationship between affect and memory. Alison Landsberg’s writing on Prosthetic Memory is taken as a starting point for exploring the empathetic potential of affective memory whilst questioning what is at stake once the ‘affective refrain’ or ‘memory’ is detached or dislocated from its originary context, once it is open to commodification and exchange.
Suggested reading:
- to be skimmed, glimpsed, looked at, or read ….
Alison Landsberg, “Memory, Empathy, and the Politics of Identification,” International Journal of Politics, Culture, and Society 22.2 (June 2009).
Alison Landsberg, Prosthetic Memory, The Transformation of American Remembrance in the Age of Mass Culture, (Columbia University Press, 2004), Chapter, Prosthetic Memory, pp. 25 – 48.

I am currently facilitating a reading group at Site Gallery around the notion of Affect.

Reading Group @ Site (Thursday 8 March)
Mobilizing Everyday Life/Fragments and Refrains
This week, the focus of Site’s ‘Affect’ reading group moves from the realm of shimmers and intensities, to investigate how the ‘affective turn’ might help shape the politics of everyday life, an ethical mode of operating in relation to both past and present. Using the current exhibition by Jeremiah Day at Site as a point of departure, reading addresses both the constitutive role of the affective fragment or ‘refrain’ and the empathetic potential of affective memory. The readings are intended as triggers for discussion, and reading group participants are invited to introduce further examples of practice and theory relevant to each week’s area of concern.


Some brief notes on this week's session
For this session, the exhibition by Jeremiah Day at Site was introduced as a foil against which to consider some of our discussions around affect, specifically in relation to Guattari’s notion of the affective ‘refrain’. Less a form of ‘text’ that can be treated or read in the same way as other texts, the exhibition perhaps points to ways in which reading itself might be considered differently. The session began with the question of how these various readings around affect might be approached affectively? How can a theoretical text be encountered in the same way as one might an exhibition or performance or piece of music? What are the implications of encountering text affectively? We talked a little about the potency of a glimpse of an idea within the act of reading, of the affective potential of skimming, or exposing oneself to a text’s affect rather than its signification. What registers of meaning and of thinking are produced through different encounters; in the encounter between reading a theoretical text and a live encounter with a performance or an exhibition? Our emphasis for the reading group is on what the encounter opens up or out, rather than on what a text (or exhibition) means. Meaning is considered mobile and changing, always being modified and amended, never fixed. Ideas and reflections on the readings cumulate as a (not always legible or intelligible) palimpsest, rather than building towards comprehension or clarity.

Beginning with Michael Hardt’s question, ‘What are affects for?’ the session began with an expression of caution against the instrumentalization of the notion or concept of affect, a concern perhaps that the ‘affective turn’ could signal just another ‘turn’ within academia, its vocabulary adopted cynically as simply the ‘on-trend’ buzz-words within current cultural discourse. As a remedy perhaps, the reading of this session turned to the work of Felix Guattari (and his development of an ‘ethico-aesthetic paradigm’ and a ‘logic of affects’). “Guattari is opposed to more conservative attempts to mobilize affect, only in the service of its subsequent capture in a reductive and elitist logic of delimited sets. He opposes this with the idea of social practice or analyses with flexible and open-ended methodologies (meta-methodologies) that enable a ‘subjective pluralism’ engaging with the complexity of affective events. Furthermore, Guattari’s embracing of affect in social practice is ethical in that it evaluates practices of living … Guattari’s response is to take the everyday infinities and powers of affect very seriously; and to develop a creative responsibility for modes of living as they come into being”. Lone Bertelsen and Andrew Murphy, ‘An Ethics of Everyday Affinities and Powers: Félix Guattari on Affect and the Refrain’, p.141
Newer Posts Older Posts Home
Subscribe to: Posts (Atom)