Article: The Meletē of Live Coding


My proposed article ‘Performing Thinking in Action: The Meletē of Live Coding’ has been selected for development as a full paper for the forthcoming special issue of the International Journal of Performance Arts & Digital Media (Issue 12.2, October 2016), on the topic of Live Coding in Performance Arts.

A PDF of the article can be downloaded here.

Abstract: Performing Thinking in Action: The Meletē of Live Coding
This article will address live coding both as a dynamic model of ‘performing thinking’ in action, and the performing of ‘thinking-in-action’. Underpinned by the principle of performing its thinking through ‘showing the screen’, live coding involves ‘making visible’ the process of its own unfolding through the public sharing of live decision-making within improvisatory performance practice. To expose the inner workings of practice foregrounds process, emphasizing the methods and mechanics of production, the durational ‘taking place’ of something happening (live). Moreover, the making visible of thinking ‘in action’ has epistemological import, shedding light on the nature of knowledge production and mode of intelligence operative therein, generating insights into this habitually unseen or unshared aspect of creative endeavour. Live coding is arguably a hybrid - even liminal - practice, operating at the critical interstice between different disciplines, oscillating between a problem-solving modality and a problematizing, questioning, even obstacle-generating tendency. Demonstrating a multi-modal model of ‘thinking-feeling-knowing’ emerging between the lines of musical-rhythmic, linguistic-verbal, spatial-visual and numerical-logical intelligences, live coding has capacity to offer insight into the commonalities and potential for complementarity between ways of knowing emerging from the sciences and arts.

Live coding can also be conceived as the performing of ‘thinking in action’, a live and embodied navigation of various critical thresholds, affordances and restraints, where its thinking-knowing cannot be easily transmitted nor is it strictly a latent knowledge or ‘know how’ activated through action. Live coding is arguably performed in actu, where in Alan Pottage’s terms, its power “exists only en acte, or in actu, (which) is to say … that is ‘is’ only in the process of its exercise”.[i] I propose to explore live coding as a performative exercise in ‘thinking in action’, for the live navigation or negotiation of certain concepts and conditions, thresholds and limits: for working with elective rules/restraints as critical leverage; for testing the relation between receptivity and spontaneity, between the embodied and intuitive, between an immersive flow experience and split-attention, between human and machine, the known and not yet known. Moreover, live coding emerges as an experimental site for reflecting on different perceptions and possibilities of temporal experience within live performance: for attending to the threshold between the live and mediated, between present and future-present, proposing even towards a quality of atemporality or even aliveness, the temporary suspension of chronos. Against the privileging of real-time performance – and narrowing of the feedback loop between intention and execution – I advocate critical value for the gaps and lags within live coding performance as reflective intervals for building the capacity for biding one’s time and knowing when to act, for the kairotic practice of intervention and ‘invention in the middle’.[ii] Drawing on the Ancient Greek concepts of techne, kairos (opportune timing) and metis (cunning intelligence), I conceptualise live coding as a contemporary exercise (askesis) for performing thinking-in-action (a meletē - meditation or ‘thought experiment’), for practicing the human qualities of attention, cognitive agility and tactical intelligence, for cultivating a more critical mode of human agency and subjectivity.

About the issue
Live coding has grown as a performance method over the past decade, infiltrating diverse art forms, but with strong grounding in musical and audiovisual performance. Following a decade of music releases, festivals, journal issues, symposia, and conference tracks, with online hubs like TOPLAP and the AHRC funded Live Coding Research Network supporting both artistic and research activities within the field, the first International Conference on Live Coding will take place at the University of Leeds in July 2015. This journal issue aims to explore the new possibilities offered to artistic performance by live coding, and whether the algorithmic approach to dynamic thought and action which underlies live coding practice can shed light on aspects of more traditional approaches in the performing arts. Live coding is essentially the act of creating and modifying symbolic instructions in real-time, encompassing historical and contemporary work that goes beyond computer-based systems to include practices in improvisation, choreography, literature, live/performance art, visual arts, and theatre. The issue will explore pertinent questions of liveness and what rule-based instruction formats, such as live coding, live scoring, or live notation, offer to the performance arts; engaging with the physicality of performance, embodiment, considerations of space, machines, audience, and perceptions of the flow of time. 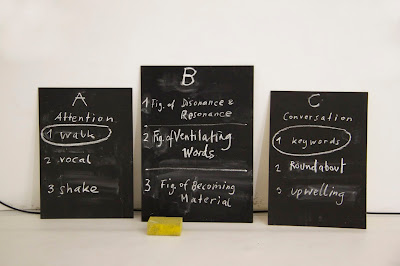 During the Winter Lab 2015, we – Nikolaus Gansterer, Mariella Greil and Emma Cocker – worked in dialogue with Lilia Mestre and Werner Moebius, towards the production of Radical Scores of Attention generated through an exchange of practices and methods for exploring the vibrant materiality of speech, language and the reverberation of voice.

The Winter Lab involved two distinct phases of activity:
Part I - in advance of the Lab itself (from the 4 December - 8 December) the key researchers focused on developing critical content for a book chapter, Choreo—graphic Figures: Vitality Gestures and Embodied Diagrammatics, which will be published in the forthcoming academic publication, Body Diagrams: On the Epistemic Kinetics of Gesture (eds. Irene Mittelberg and Alexander Gerner), Gesture Series, John Benjamins Publishing, Amsterdam. Drawing on the research generated through our project, Choreo—graphic Figures: Deviations from the Line, this chapter addresses how we have practiced a shift within our collaboration from the disciplinary gestures of drawing, writing and choreography towards the aesthetic-epistemological gesture of artistic (re)searching, to give tangible articulation to the pre-gestural register of ‘vitality forces and affects’ (which we call figuring) operating before, between and beneath the more readable gestures of artistic practice. Bringing our practice-as-research into dialogue with theory, within this chapter we reflect on our own attempt to render communicable the dynamic experience of figuring within the creative process, through the production of (choreo—graphic) figures, an expanded system of vitality gestures and embodied diagrammatics. The process of developing content for the chapter has involved extended periods of conversation for critically reflecting on our shared practice, as well as for elaborating through close reading and discussion on excerpts from different theoretical sources including Gabriel Brandstetter, Vilém Flusser, Erin Manning and Brian Massumi, Petra Sabisch, and Daniel Stern. The resulting conversational transcripts are taken as a starting point for developing the chapter (More about the chapter soon in Publications)

We tested our permuational score - comprised of these nine fields of activity - through a series of Live Explorations of different duration, including a public presentation at Tanzquartier on 12 December 2015. During this Lab, we continued to work closely with documenter, Viktor Jaschke, who had previously joined us in the Summer Method Lab earlier in the year. In dialogue with Viktor, we began to further test different strategies for generating still and moving-image material from our live explorations, considering how this material might function within the context of both page-based and web-based publication or as an autonomous video documents. 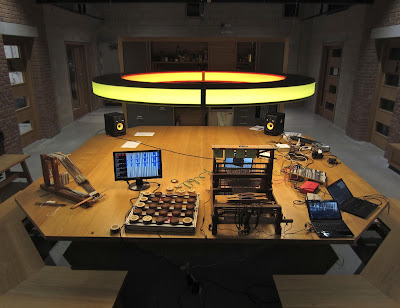 From 24 - 29 October I am working at FoAM Kernow in Cornwall with Alex Mclean, Ellen Harlizius-Klück and Dave Griffiths as part of the AHRC Digital Transformations Amplification research project, 'Weaving Codes – Coding Weaves’. This project asks: “What are the historical and theoretical points at which the practice of weaving and computer programming connect? What insights can be gained if we bring these activities together, through live shared experience? How do digital technologies influence our ways of making, and what new digital technologies can we create to explore their social use in creative collaboration? The research residency included a public performance exploration of weaving and live coding (see documentation below) as well as discussions about a forthcoming special issue of Textile: Journal of Cloth and Culture focusing on insights and findings from this project. My role in this project is as a critical witness/interlocutor; reflections from my observations on the project will form part of a research article for the special issue of Textile, elaborating ideas developing within a series of conference presentations around the title 'Live Coding | Weaving : Penelopean Mêtis and the Weaver-Coder's Kairos. 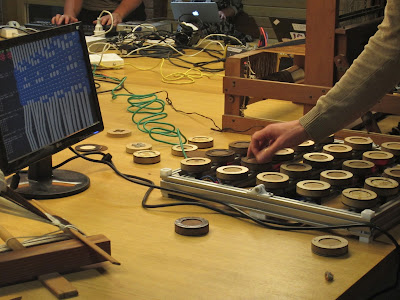 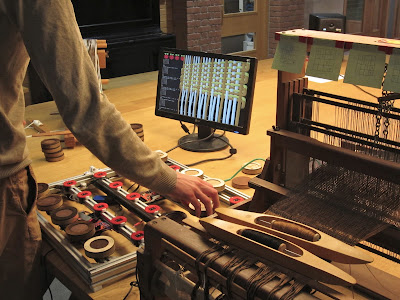 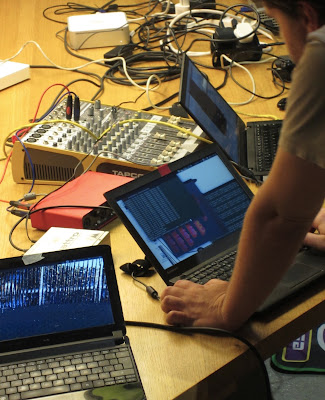 Conference Paper: Kairos Time: The Performativity of Timing and Timelines

I will be presenting my conference paper, 'Kairos Time: The Performativity of Timing and Timeliness … or; Between Biding One’s Time and Knowing When to Act', at the forthcoming first PARSE biennial research conference at the Faculty of Fine, Applied and Performing Arts, University of Gothenburg, Sweden, running November 4–6, which takes as its point of departure the question of "TIME." Speakers include Bruno Latour, Simon Critchley, Simonetta Carbonaro, Coco Fusco, Jalal Toufic, The Otolith Group, Flat Time House and Vermeir & Hieremans. Please follow these links for information about the conference structure and the draft timetable, featuring links to the presenters of the Conference.


City University of Hong Kong, Kowloon Tong, Hong Kong
30 October 2015 - 29 November 2015
An exhibition project by the University of Applied Arts Vienna in cooperation with the School of Creative Media/ City University of Hong Kong
Curated by Gerald Bast, Alexander Damianisch, Romana Schuler
In the 1960s, the term “visual research” was introduced into certain fields instead of the term “art”. The term “artistic research”, which has become increasingly relevant in recent decades, continues this development. Research characterizes an understanding that is gaining more and more validity in art while having an innovative impact. In the exhibition “CONTEMPORARY CODE – ARTISTIC RESEARCH”, artistic research is being internationally positioned as part of the new academic guiding model of the University of Applied Arts Vienna. Five years ago, President Gerald Bast co-initiated the PEEK Research Program in Austria, with the aim of promoting an interdisciplinary approach in the arts and sciences. Today, PEEK is one of Austria’s key contributions to the international developments in the field of artistic and research driven activities.