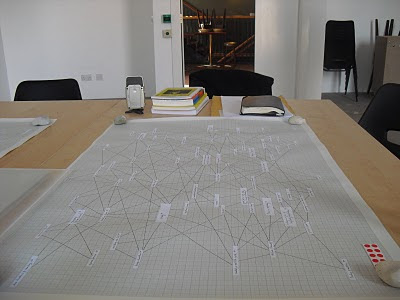 In terms of responding to the David Berridge’s proposition of ‘Field Station’  I have attempted to map a field and propose it as a field station; the text/objects that I presented are both reflective and prospective, (like Breton’s ‘double headed-arrow') they mark the territory of what has come before but also suggest a possible future use. I wanted to propose a series of maps as a response to the idea of field: field-maps: My hope is to use these ‘field-maps’ to help me to better understand what might constitute the ‘field’ of my own practice, and the method of my own writing, which I am increasingly coming to see as a restless practice, or a practice that uses the idea of restlessness as its method. Thinking through field-station has forced me to think about ‘the field’ in terms of the architecture of my own art-writing practice, thinking about architecture as:

*  A spatial structure or model (what is its shape)
* Verb: The action or process of building (of assemblage) (how is it produced, what is it methods). Field as an act or of doing something: a sphere of activity, to put into action, a complex of forces that serve as causative agents in human behaviour.
*  Network: the way components fit together (how are connections made and re-made) 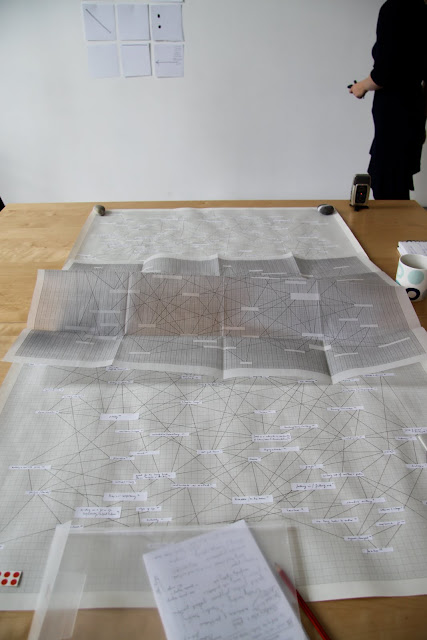 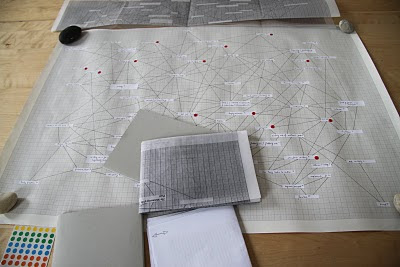 (1)   * A mapping or rhizomatic field (the network of ideas, practice, bodies – field as community). An attempt to articulate or map or chart or diagram a sense of my writing practice, which operates under the title, Not Yet There. The tension between or field created between different practices (art/encyclopedia; ‘knowing’/knowledge; the gallery/the academy).
(2)   * Field Station – what constitutes a (art-writing) studio and how can this be made portable or mobile or taken to the ‘field’. Studio as constituted by a set of practices (produced); by the physical surroundings (belongings) and by what it affords (thinking space). NB) In order to build in spaces that are more speculative you have to build in spaces that are more speculative. Mind-mapping habitually presupposes a starting point, a point of original. Here my attempt is to remove the need for a fixed or determined start, or rather to replace the propositional of the conventional starting point with the notion of a potential Macguffin.
(3)   * Open Field (as open space – thinking space)  - a template, work and tool. An imaginative proposition and an operational model. An attempt to articulate or map or chart or diagram the idea of the ‘field’ as open space, a space of thinking, a germinal terrain. Mapping the process of thinking, without this being about what that thinking is about; a mapping of a process and the producing of a map that corresponds to that process.
(4)   * An operational model: using the ‘field’ model as a device through which to explore my field of art-writing practice. A proposition of an essay as map, the essay as a network or proposed community of ideas. The field as essay.  Visual essaying (essay as rhizome). An attempt to use this open field as a device to lay down (or seed or plant) a few specific ideas. A model to be used: what is the field of this event?


* Clearing: an expanse of open or cleared ground
* Event: the area in which (field) events are held
* Space of Contestation: a battleground.
* Force/Agency: (physics) the influence of some agent, as electricity or gravitation, considered as existing at all points in space and   defined by the force it would exert on an object placed at any point in space.
* Horizon: (optics) the entire angular expanse visible through an optical instrument at a given time or (photography) the area of a subject that is taken in by a lens at a particular diaphragm opening.
* Interconnectedness: (psychology) the total complex of interdependent factors within which a psychological event occurs and is perceived as occurring.
* Record: (in a punch card) any number of columns regularly used for recording the same information
* Playing the field - to vary one's activities, a kind of promiscuous practice, "avoid commitment" – a restlessness
* Flat land – a non-hierarchical playing field
* Skilfulness: To respond to
* Incisive: the site of a surgical operation
* Classification: a data structure
Newer Post Older Post Home