On 30 October, I presented a lecture as part of the NTU fine art context lecture series, in response to the words Writing/Unwriting. I often describe my practice as operating restlessly along the threshold of writing/art, involving performative, collaborative and creative prose approaches to writing about, parallel to and as art practice. 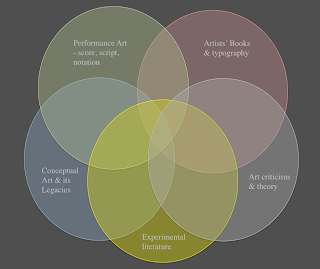 In this presentation, I moved from elaborating upon the idea of writing ‘in parallel to’ (with reference the rhetorical practice of ekphrasis, art-writing and various artist/writer collaborations including Hélène Cixous and Roni Horn) towards exploring various forms of writing as art practice (specifically those practices located at the interstice of conceptual art and its legacies, performance art and its various forms of inscription [notation, scores, scripts], and experimental forms of literature). I used the presentation to outline an emerging strand of my evolving research enquiry in which I am interested in recuperating critical value for the idea of poetic. Whilst the term ‘poetic’ is at times used rather disparagingly within the art world, I am currently exploring references to poetry or the poetic which speak instead of its resistance, even radical or political potential, poetry as a form of refusal, an affirmative form of language for speaking of things which don't yet have a language, or which refuse the conventional forms of naming and knowing.

“Poetry opens the doors of perception to singularity. Poetry is language’s excess: poetry is what in language cannot be reduced to information, and is not exchangeable, but gives way to a new common ground of understanding, of shared meaning: the creation of a new world […] Poetry is the reopening of the indefinite, the ironic act of exceeding the established meaning of words […] Poetry is … the signifier disentangled from the limits of the signified”. Franco Berardi, The Uprising, Poetry and Finance, 2012

Drawing on references including Franco Berardi’s The Uprising, Poetry and Finance (2012); Ed Sander’s Investigative Poetry (1976); Hélène Cixous’ quest for a form of language for speaking of the nature of thinking in flight, not as thought made concrete and communicable; Jan Turnovský's The Poetics of a Wall Projection, where he states that “The maxim of the poetic is not to fix meaning but to offer a choice of possibilities – an indeterminate open-endedness”, Jacques Ranciere on the 'difficulty' of Stéphane Mallarmé's poetry, I sketched out my interest in the resistant potential of the poetic form: in relation to its open-endedness, its capacity for opacity, absurdity, emptiness, even muteness; the material and sonorous properties of poetic language in contrast to the language of signification; forms of ‘writing’ that emerge between the word and the page; a poetry intent on unfixing meaning, destabilizing the view of writing as a means of knowledge and control.