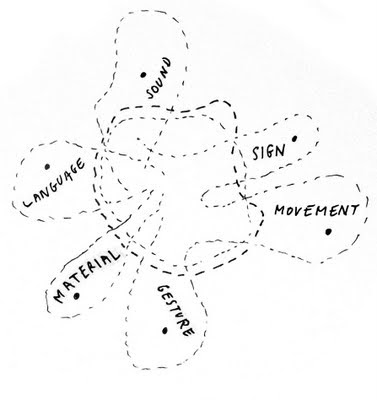 I have been invited by artist Nikolaus Ganster to present a lecture/workshop for the Department of Transmedia Arts (University of Applied Arts in Vienna) in June. The lecture will be used as a space to specifically further ideas developed as part of my essay for Gansterer’s forthcoming publication, Drawing a Hypothesis: Figures of Research. Whilst in Vienna, we will also be developing ideas for a performative reading, which we intend to operate in conjunction with the launch of the publication (Autumn, 2011); and ideas around a possible international research project exploring expanded drawing practices.

More information about Drawing a Hypothesis
Drawing a Hypothesis is an exciting reader on the ontology of forms of visualizations and on the development of the diagrammatic view and its use in contemporary art, science and theory. In an intense process of exchange with artists and scientists, Nikolaus Gansterer reveals drawing as a media of research enabling the emergence of new narratives and ideas by tracing the speculative potential of diagrams. Based on a discursive analysis of found figures with the artists' own diagrammatic maps and models, the invited authors create unique correlations between thinking and drawing. Due to its ability to mediate between perception and reflection, drawing proves to be one of the most basic instruments of scientific and artistic practice, and plays an essential role in the production and communication of knowledge. The book is a rich compendium of figures of thought, which moves from scientific representation through artistic interpretation and vice versa.
Contents
Drawing a Hypothesis (Preface), Nikolaus Gansterer
I Must Be Seeing Things, Clemens Krümmel
A line with variable direction, which traces no contour, and delimits no form, Susanne Leeb.
Grapheus Was Here, Anthony Auerbach
Asynchronous Connections, Kirsten Matheus
Figures of Thoughts, Gerhard Dirmoser.
Collection of Figures of Thoughts, Gerhard Dirmoser
The Line of Thought, Hanneke Grootenboer
Dances of Space, Marc Boeckler
Distancing the If and Then, Emma Cocker
Processing the Routes of Thoughts, Kerstin Bartels
The Hand, the Creatures & The Singing Garden, Moira Roth
Drawing Interest / Recording Vitality, Karin Harasser
Hypotheses non Fingo or When Symbols Fail, Andreas Schinner
Three Elements, Axel Stockburger
A Fragmentary Collection of Emotions and Orientations, graphically recorded, Christian Reder
Radical Cartographies, Philippe Rekazewicz
Measuring the World, Katharina Bösch, Christine Haupt-Stummer, Andreas Kristof
Subjective Objectivities, Jörg Piringer
The Afterthought of Drawing: Six Hypotheses, Jane Tormey
Nonself compatibility in Plants – The Floral-Animal continuity, Monika Bakke.
On the importance of scientific research in relation to the humanities, Walter Seidl
Strong Evidence for telon-priming Cell Layers in the mammalian olfactory bulb, Nardo, M. L.; Adam, A.; Brandlmayr, P.; Fisher B. F.
Expected Anomalies caused by increased Radiation Activity, Christina Stadlbauer
On Pluto 86 Winter lasts 92 Years, Ralo Mayer
The Unthought Known, Felix de Mendelssohn
wiry fantasy or the electronic line is also a handwriting and itself effects the overcoming of its system, which it draws, constructs and leaves: into the poetical eye, too, which has dreamed its original state of pure perception and launches itself into the dialogue as source, Ferdinand Schmatz
During the Summer I will be developing a series of performance presentations in collaboration with Nikolaus Gansterer to launch Drawing a Hypothesis (which are scheduled for the Autumn at a number of venues including MUHKA, Museum of Contemporary Art, Antwerp; KNAW, The Royal Netherlands Academy of Arts and Sciences, Amsterdam in collaboration with Jan van Eck Academy; and the Secession, Vienna in collaboration with the University of Applied Arts Vienna)