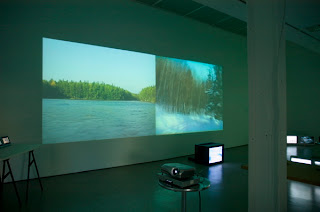 "... Working against the teleological grain of Western knowledge, irresolution is the wicked genie of ambiguity and ambivalence, preferring a turbulent state of disorder to the illusionary calm of logical or rational cognition. Irresolution carries with it connotations of uncertainty and indecision, of conjecture and disquiet; for it speaks of a failure to reach consensus and a sense, perhaps, of things not being quite as they should be. It suggests a point of dissatisfaction or doubt; the troubling or nagging worry felt when something refuses to be laid to rest. It is the quiet voice whose reservations still linger at the edges of a decision or declaration; whose questions threaten to stir or break the surface of any temporary harmony or contented stasis. Irresolution is a gesture of pause or hesitancy, an event of reflection and of momentary stillness before action resumes and activities become set again in motion. It is an indeterminate condition that brings to mind the metaphor of loose threads where akin to the garment cast aside mid-stitch, a narrative logic fails to become coherent, and instead seems to unravel or relinquish its temporary shape, falling formless to the floor in abject tangles [...] From the personal to the political, the notion of irresolution suggests that something has been left unsaid: it describes a form of psychological stalemate resulting from a social bind that has been left in limbo; a relationship forsaken but not forgotten, a history that has been shelved but not yet archived. Politically speaking, irresolution might describe ideas and belief systems that are pitched in perpetual tension; the friction of irreconcilable histories; the jarring of incompatible agendas and of binary forms. On a more personal level, irresolution is the condition manifest in the failure to forgo or abandon a romantic attachment: it evokes a sense of emotional ties which refuse to be severed, conjured whilst melancholically tracing a finger over a lost lover's letter, or dwelling hopelessly in the imaginative space afforded by fading photographic mementoes. Representative of a dialogue broken or sentence stalled, irresolution emerges as a gesture of both futility and pleasure, attesting alternatively to the frustration felt at the argument abandoned before a deal is struck, or the sense of promise which follows the conversation postponed until some future moment ..."
Newer Post Older Post Home