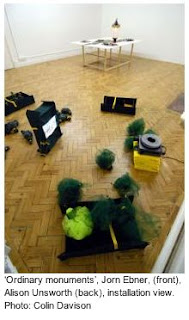 The text was commissioned by Vane Gallery as an exhibition essay for Ordinary Monuments by Jorn Ebner and Alison Unsworth, which examined the urban environment, considering both its planned and random nature and highlighting aspects that often go unnoticed. Ordinary Monuments was at Vane from12 January – 11 February 2006.

"At the heart of all imaginary realms is a delusional fantasy. The desire to create another world is built on a foundation of idealism, escapism and on the suspension of disbelief. In the child’s fancy-dress exploits; in the obsessive pursuits of the model railway fanatic; in the blueprint proposals on the tabletops of city developers; and in the plans of the most hopeful utopian, there inevitably exists the desire for a world beyond the present reality, a better world; a brave new world. Any imaginary or virtual realm allows the visionary the possibility of rewriting or re-conceptualising reality as something other, something different. However, in dreams of utopia lurk the ghosts of present dissatisfaction, frustration and discontent. Secret fiefdoms invert realities where the individual is impotent, powerless or repressed. Utopian states promise a perfect society of equality and community, where the pains of poverty, misery and disease are displaced or somehow wished away.

Combining the Greek words ‘not’ (ou) and ‘place’ (topos) the original term utopia means ‘nowhere’ or literally ‘not-place’, and was created to suggest the two neologisms ‘outopia’ (no place) and ‘eutopia’ (good place). The idea of utopia finds form in numerous economic, political, historical and cultural examples from Marxism to The Matrix, offering both the possibilities and tensions of eutopia (positive utopia) and dystopia (negative utopia) alike. The book Extinction by Thomas Bernhard (whose German version is referred to fleetingly within Jorn Ebner’s installation), muses on the difference between comedy and tragedy. The resolution reached is that they cannot be distinguished for this would require an impossible decision or differentiation, and that instead they offer an interconnectedness that cannot be pulled apart. The condition of utopia is equally ambivalent and promises an experience that oscillates between the eutopian dream and the horror of its dystopian actuality, in which the drives of optimism and pessimism are perpetually pitched in tension...."