Everything is so much bigger than us 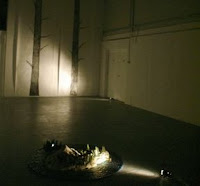 This text is specualatively written in response to the exhibition, Everything is so much bigger than us and was originally posted on the reviews unedited site at a-n.co.uk. See full text here

"At a surface level only a fine line differentiates the desire to escape from a given situation from the more existential yearning to disappear altogether; for both types of willed departure are marked by the longing to slip the net of one's everyday existence in search of new experiential frontiers and the yet unknown. At first glance too, there is little to delineate between the forms of situational and existential boredom, for each dreary manifestation seems plagued by the slow monotony of passing hours and a feeling of deep, dark dissatisfaction in the here-and-now. Closer examination however reveals a greater disparity between these two modes of ennui: for it is the different indifference between waiting for the belated bus and waiting for life's final curtain call...."
Newer Post Older Post Home