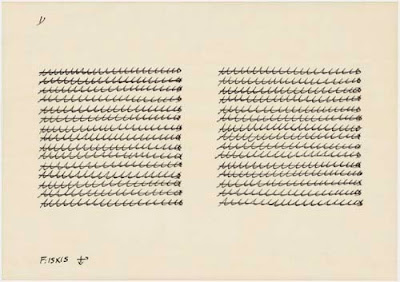 I am currently writing a review of the exhibitions by Hanne Darboven and Raphael Hefti at Camden Arts Centre for Frieze magazine. I anticipate that I will also continue to explore Darboven's work in further writing, as it is providing a helpful foil against which to consider some of the preoccupations and concerns within my current research-practice, not least in relation to the strategic or tactical use of opacity or incomprehensibility as a means for refusing the pressure of representation or signification, but also as a form of writing practice based on doing rather than meaning. Below is a quote from Della Pollock's essay “Performing Writing” (recently encountered following its citation by Barnaby Drabble as part of the ARC (Artistic Research Catalogue) conference in The Hague in early March) which I am currently thinking about in relation to Darboven's practice.


“[…] at the brink of meaning … writing as doing displaces writing as meaning; writing becomes meaningful in the material, dis/continuous act of writing. Effacing itself twice over – once as meaning and reference, twice as deferral and erasure – writing becomes itself, becomes its own means and ends, recovering to itself the force of action. After-texts, after turning itself inside out, writing turns again only to discover the pleasure and power of turning, of making not sense or meaning per se, but making writing perform: Challenging the boundaries of reflexive textualities; relieving writing of its obligations under the name of ‘textuality’, shaping, shifting, testing language. Practicing language. Performing writing. Writing performatively.” Della Pollock, “Performing Writing” in The Ends of Performance (eds.) Peggy Phelan and Jill Lane, (New York: New York University Press, 1998) p.75.

I am also returning (once more) to the passage (below) from Luce Irigaray's 'This Sex Which is Not One' (a passage that figures periodically and recurrently within my research as a point of reference and provocation), since there is something in this Penelopian tendency of 'weaving' within Darboven's work, in her practice of 'ceaselessly embracing' a system or structure (writing, numbers) only to then cast it off, dispel its logic.
“Contradictory words seem a little crazy to the logic of reason, and inaudible for him who listens with ready-made grids, a code prepared in advance … One must listen to her differently in order to hear an “other meaning” which is constantly in the process of weaving itself, at the same time ceaselessly embracing words and yet casting them off to avoid becoming fixed, immobilized. For when ‘she’ says something, it is already no longer identical to what she means. Moreover, her statements are never identical to anything. Their distinguishing feature is one of contiguity. They touch (upon). And when they wander too far from this nearness, she stops and begins again from ‘zero’.  It is therefore useless to trap women into giving an exact definition of what they mean, to make them repeat (themselves) so the meaning will become clear … If you ask them insistently what they are thinking about, they can only reply: Nothing. Everything.”
Newer Post Older Post Home