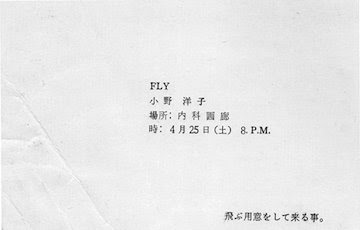 Yoko Ono, Fly Piece, 1963.
Permission Granted: This text is a reflective meditation on the power of a form of invitational yes that can be witnessed at play within certain art practices; an interruptive and potentially dissident species of affirmation that has a specifically inceptive function, for provoking a form of thinking and being differently. Permission Granted extends the ideas of a short pamphlet, ‘The Yes of the No!’, that I produced following a writing residency at the artist-led project Plan 9 in Bristol, during their Summer of Dissent, 2009. The original text of ‘The Yes of the No!’ is also being published in this issue of Drain.
Power: This issue of Drain attempts to expose the cultural faciality of power, as well as manifestations of power as simulacra, which obfuscate traditional inquiries into its construction. If power connects the virtual and the actual, how does cultural creativity channel or destabilize this connectivity? The corporate-academic-entertainment-military-industrial complex and its front-end, the global information machine floods us with images, and images of images, to cause sensory overload, and yet at the same time, acute sensory deprivation. Most of all, power entrenches a visual literacy that allows us to see only its style, leaving us unable to access other ways of seeing and becoming. How can we parody this visual literacy, and the speed, cadence and grammar of this power and its affects? If the simulation of power is necessary and absolute, can creative acts and molecular politics slip through the surveillance and desensitizing of territorializing systems?