The short text below was commissioned to respond to or act as a form of 'foil' for a performance by Terry O’Connor, Frances Babbage, Steve Nicholson and Bill McDonnell. 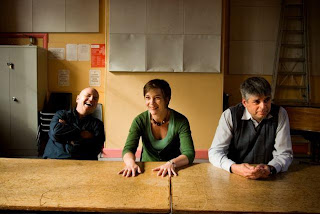 The performance was part of a project led by Terry O'Connor entitled 'Say the Word' in which she invited various individuals to submit a single word that she would then develop performance-based work in response to. This specific performance was based on the following:
"On 26th October 2007 the French conceptual artist Sophie Calle sent a single word to Terry O’Connor in the School of English.

S. The word was ‘No’.
F. Actually it was ‘Non’, the French for ‘No’, written N.O.N.
S. And Sophie Calle sent a P.S. ‘P.S. this is my word, and it is not a refusal- see already how ambiguous is this word, since I’m saying yes by answering no. If you don’t like my word for some reasons tell me, I have other words in my vocabulary.’
F. This word became the starting point for the performance today. We began by collecting instances of refusal, denial and absence from literature, history and our own personal lives – instances that contain the short and simple word ‘No’."

The performance took place as part of the festival www.urbaines.ch. The individual artist/curator Simone Aughterley who selected this piece is a choreographer based in Switzerland. She chose three women artists- Terry O'Connor, UK artist Fiona Wright and the NZ dancer and artist Kate MckIntosh (who was recently performing in Nottingham as part of Nottdance 08.) Previous UK artists at des Urbaines are Franko B and Marisa Carnesky

I was invited to produce a text that attempted to explore some of the ideas addressed within the performance (text below). I wanted to use the text as an opportunity to further explore ideas in relation to refusal and potentiality, which I have also been exploring in other work such as the essay 'over and over, again and again', and within a prospective phase of new research entitled 'towards an ethics and aesthetics of non-production, inaction and refusal'.
" ‘Non’ - the French word meaning ‘no’. Look up the word in any dictionary and you will be told of its negative connotations; how it functions as an interjection that only refuses, denies or seeks to cancel out. It is an utterance that stands in the way of things or that declines to participate - a form of obstacle or dampening down, like the stubborn voice of the party pooper or killjoy for whom the glass remains half empty, never half full. Or else it expresses nothing but a deficiency or dearth, a lack or absence, the failure of something to materialise. It is the response dreaded by the unrequited lover, the puncture wound by which a proposal gets let down or loses it verve. It is the final call that brings about an end, the cruel blow that nips things in the bud, the cut by which hopes and dreams and nascent possibilities are dashed and then wither. Functioning as a measurement, it is the marker of all that is nonexistent, missing or simply not allowed. Alternatively, when taken as an instruction or a rule, it is the governing voice of restrictive authority that tells us what not to do, which attempts to silence or stop us still in our tracks. Or maybe it is the calling out of the mother whose child’s hand draws too close to the fire. How quickly a term can turn. As a protective intervention it can be seen as an ethical gesture that wishes to keep the other from harm’s way - an act of care or of responsibility, a pledge, a promise, or a commitment made. It is a way of stopping one flow of action in order to allow another to continue or to develop; an interruption based on being able to conceive an imagined future and the consequences of each individual act. Whilst the ‘yes’ of surrender can signal the passive and acquiescent acceptance of the seemingly inevitable, ‘no’ is a defiant gesture of protest that refuses to give up or give in. It is the rally cry of dissent, the declaration that enough is enough, that a line has been crossed, that things have gone too far.

The binary logic of opposites thus collapses in on itself. Here is the yes of the no, which is to inhabit the position of no in a way that allows, opens up or enables things to move forward, to move on. It is to inhabit the position of no as a form of punctuation or as a momentary pause, as a space of refusal and of potentiality, as a tactic for creating time to think and re-imagine the trajectory of future action. Look up a word in any dictionary but remember that definitions can be irredeemably imprecise, for meaning is never still, nor ever wholly certain. Consider ‘non’ - the French word meaning ‘no’."
© Emma Cocker, 2008.