Over and Over, Again and Again 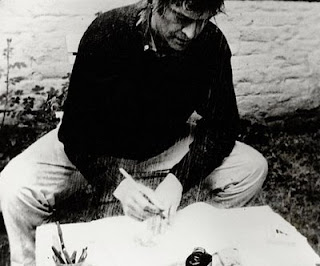 Endless actions. Irresolvable quests. Repeated tasks that are inevitably doomed to fail or that are recursively performed – over and over, again and again. In this essay, I explore how the myth of Sisyphus can be used as an interpretive frame through which to reflect upon examples of artistic practice that play out according to a model of purposeless reiteration, through a form of non-teleological performativity, or in relentless obligation to a rule or order that seems absurd, arbitrary or somehow undeclared. According to many accounts within Classical mythology, Sisyphus was punished for his impudence and lack of respect for the gods, and assigned the task of rolling a rock to the top of a mountain only for it to then roll back down again. His interminable sentence was that he would remain locked into the repetition of this forever failing action for all eternity. Though the term Sisyphean is often used to describe a sense of indeterminable or purposeless labour, it actually refers to a tripartite structure whereby a task is performed in response to a particular rule or requirement, fails to reach its proposed goal and is then repeated. More than a model of endless or uninterrupted continuation of action, a Sisyphean practice operates according to a cycle of failure and repetition, of non-attainment and replay; it is a punctuated performance. A rule is drawn. An action is required. An attempt is made. Over and over, again and again - a task is set, the task fails, and the task is repeated. Ad infinitum.

In diverse examples of conceptual and post-conceptual art practice from the 1960s onwards, an artist appears locked into some hapless or hopeless Sisyphean endeavour - the blind or misguided following of another’s footfall, the foolhardy attempt to write in the rain, hide-and-seek games using the most infelicitous form of camouflage, the never-ending pursuit of an impossible or undeclared goal. Rather than an endless reiteration of the myth’s logic - where meaning remains somehow constant - the repeated occurrence of the Sisyphean gesture has the potential to be inflected with cultural specificity at particular historical junctures. Within the various practices discussed in this essay, the myth of Sisyphus is invoked in different ways where its meaning can be seen to shift, moving from (and also between) a sense of futility and of an individual’s resignation to the rules or restrictions of a given system or structure, through resistance, towards a playful refusal of the system’s authority. Here, the myth’s logic becomes pleasurably adopted as the rules of a game or as a way of revealing porosity and flexibility within even the most rigid framework of inhabitation. Whilst an interest in failure and repetition is evident at various historical and cultural moments, I want to focus on specific practices in order to stage and then shift between the possibilities of different readings, moving from a model of resignation or even resistance towards one of critical refusal, in an attempt to move beyond purely absurdist readings of the Sisyphean paradigm. My aim is to work towards an affirmative reading of the myth’s logic by drawing attention to selected examples of artists’ practice from the 1960s onwards, where the Sisyphean loop of repeated failure is actively performed within the work itself as part of a generative or productive force, where it functions as a device for deferring closure or completion, or can be understood as a mode of resistance through which to challenge or even refuse the pressures of dominant goal-oriented doctrines." extract from Over and Over, Emma Cocker, 2008 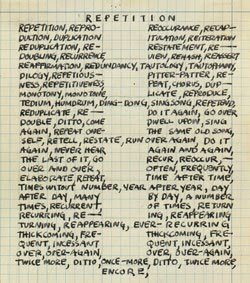 Context - background to anthology: Ancient myth has always provided fertile ground for Western artists and theorists of the visual. Yet art historians tend to associate classical mythology with historical styles and only rarely with the art of the present. Indeed, current writing on contemporary art is, with few exceptions, curiously devoid of mythological content, despite demonstrable interest in myth on the part of several contemporary artists, ranging from earlier figures such as Louise Bourgeois and Cy Twombly to more recent arrivals such as Gregory Crewdson, Fred Wilson, Bill Viola, Ann Hamilton, and John Currin. While some artists’ work invokes the power of classical mythology explicitly, as in an expressly narcissistic video of by Patty Chang (Fountain, 1999) or an Orpheus-inspired installation by Felix Gonzales-Torres (Untitled (Orpheus, Twice), 1991), others gesture toward myth in more subtle ways, as do, for example, in Gerhard Richter’s mirrored installations and paintings.

Also of note is the preoccupation with myth on the part of several twentieth-century theorists and philosophers, all of whom have made a significant mark on the discipline of art history: Theodore Adorno, Maurice Blanchot, Hélène Cixous, Sigmund Freud, Herbert Marcuse, Jacques Lacan, Paul de Man, Louis Marin, Gayatri Spivak, et al. In light of these and other connections, this anthology aims to explore (and to some extent establish) the multifaceted intersection of contemporary art and classical myth. Essays addressing this topic may concentrate on a single work or series as it relates to a specific myth or on a single artist whose work seems driven by an overarching agenda, for which a certain myth makes a particularly apt metaphor. Essays that employ myth for the purpose of grappling with dominant trends in contemporary art are also welcome, as are mythologically inflected meditations on the concept of the visual art object as theorized, deployed, and constructed within contemporary art and culture.

In a sense, the essay returns to ideas touched upon in a review of On Kawara's Eternal Return at Ikon Gallery, Birmingham from 7 July 2006 to 9 September 2006. 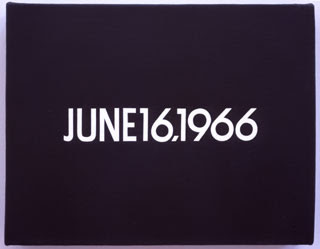 "Undoubtedly, the decision to indefinitely repeat an action is no slight matter; and waiting to begin the infinite task must register with uncertain gravitas. The voluntary move to repeat a rather banal, or inherently meaningless gesture, as such is not one that should be taken lightly. Would Sisyphus have begun to roll the rock had he not been under orders? Even with the myth’s promise of the kind of transcendental happiness brought about only through such actions of eternal recurrence; a doubt persists. Would he have wavered, might he not have ventured forth? At some stage, the repetitious act will become ritualised or occupy the status of a habit but for some time it must feel at odds with the body, akin to the pain of trying to wear in new shoes. Even in this project there might have remained a hiatus between concept and action; a moment of pause or waiting; of human anticipation before the cogs of the conceptual ‘machine’ began to roll. Perhaps it is this, which registers in the slightly hesitant, uncertain strokes of ‘JANUARY 30, 1966’. For whilst the production or execution of a conceptual work might well operate with the systematic and impersonal precision of a machine, the decision to begin will perhaps always be marked by a sense of human, all too human deliberation."