Somehow between the Water and the Wind

I have been invited to write a text in response to a forthcoming exhibiton, Isoli [cont], by Brigid McLeer in Coventry. 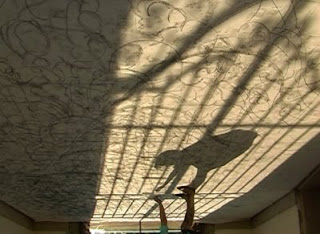 Image: Brigid McLeer, Isoli [cont.]
Below is the PDF of my essay 'Somewhere between the water and the wind' written in response to the work of Brigid McLeer

Isoli [cont.]
Works by Brigid Mc Leer Lanchester Gallery Projects, Coventry School of Art & Design
9th – 30th January 2009.
Isoli [cont.] is a solo exhibition by Brigid Mc Leer which brings together recent work, current work in progress and a related work from 1997 all of which explore contingency – as a method of production, an aesthetic form and as a way of thinking about subject formation. The work aims to question the notion of the ‘individual’ as an ideal construct, and to draw attention to the extent to which investment in the individual prefigures many of the more damaging tenets of capitalism. Instead it proposes contingency as a founding, and preferable, state of being and society. The works in Isoli [cont.] circle around a set of pieces made while on residency at San Servolo island in Venice (Summer 2007). San Servolo housed the Veneto region psychiatric hospital for 250 years until it was closed in the 1970s. The ‘islands’ (isoli) of the title therefore refer both to the literal island of San Servolo, the carceral ‘island’ of the psychiatric institution and the supposed island of the individual. Having a continual interest in process, Mc Leer’s current work consists of extensive, durational and laborious activities of solitary writing or drawing that translate particular sources. Strongly influenced by the systems-based, repetitive and serial strategies of minimalist and structuralist art, film and literature, this new work inserts into this pure, and often masculinist dream, a labouring, st(r)aining body, that is also producer of ‘images’- of reconfigurations within the contested terrain of representation. As with much structuralist and poststructuralist work, individual ‘expression’ is superseded through the use of procedural approaches. The intention however is not to evacuate the work/world of a subject, but rather to demonstrate the inherent interdependency of both. Many of the works use a rule-bound method to transform particularly chosen sources (texts, sites, images). This process is often recorded - in video, sound or still photography - and these ‘records’ are reconfigured to become new works in their own right. As such the figure of the artist herself operates as an equivocal presence in the work, caught up in the representational realm that she is also producing. Activities such as drawing over the moving shadow cast by the sun shining through San Servolo’s original hospital gate (Isola:Incontro, 2007), or the writing-out over and over themselves of all the words listed under ‘a’, ‘b’ ‘c’ etc. in a dictionary (Concise Chambers 2008), or the gradual erasure (using masking fluid) of every word, except the capital letter ‘I’s, in Kobo Abe’s 1964 novel The Face of Another (The Face of Another 2009), are all simple repeated procedures which not only develop complex reconfigurations of texts or sites, but also establish a temporal field of labour or production. In Mc Leer’s most recent, and most ambitious object-based work to date, The Face of Another (cont. version), the doors of a 8’5” corten steel shipping container become a free-standing ‘wall’ and site for the installation of 16 pieces of 2’ x 2’ hand-engraved sheet copper. The copper itself bears a pattern of interconnecting ‘I’s (taken from Abe’s novel) and the tarnishing sweat marks and hand-prints of the body that drew them. Together the elements invoke the co-dependency of the individual and high-capitalist global trade, at the same time as they perform new, and more productive versions of dependence. Contingent versions: archipelagos. Working through literal, metaphoric and synecdochical modes the work offers, and at the same time, disrupts signification. A name therefore could be both a person and a shape; or sheet copper could be a reflective surface, a quotation of a minimalist work by Carl Andre and a market commodity; or a videoed action could be a record of time spent working in a site and a time-based image entirely implacable and ectopic. In addition the work is made of multiple, interconnecting parts or series and in continually modified versions. So it is always work in progress and as such the defiance of the island/individual and/as the (art)object is encountered, contested and made contingent. Cont. The exhibition is accompanied by a publication with a commissioned essay by Emma Cocker.