In November 2007, I interviewed artist Vlatka Horvat in New York as part of my research for the essay 'Over and Over, Again and Again', which will be included in a forthcoming anthology on Contemporary Art / Classical Myth 2009: A collaboration between Department of Art History, Maryland Institute College of Art, Baltimore and Department of Art History, Lamar Dodd School of Art, University of Georgia, Athens, Greece. (Click here for more information) 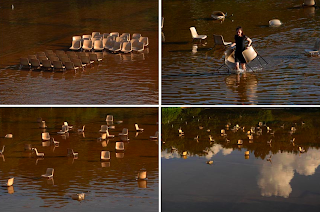 Image: Vlatka Horvat, This Here and That There, A proposal for a performance by Vlatka Horvat, An 8-hour performance, August 24, 2007, 10am-6pm, A commission by the Haus der Kulturen der Welt (HKW) Berlin for 'nomadic new york' - curated by Andre Lepecki

An interview transcript based on a series of conversations is going to be published in the Dance Theatre Journal, in the Spring Issue, 2009. The essay 'Over and Over, Again and Again' (which the interview formed part of the research for) will be published in 2009, and aims to explore the notion of Sisyphean repetition in relation to a number of artistic practices from the late 1960s onwards. I am proposing to use the Myth of Sisyphus as a form of exploratory or curatorial framework through which to discuss a range of practices that appear to be played out according to a model of purposeless repetition; non-teleological performativity, or in relentless obligation to a rule or requirement that seems absurd, arbitrary or undeclared.
Newer Post Older Post Home