Wandering and the Public Realm

Commissioned essay/article for forthcoming special issue of a-n magazine focusing on art and the public realm. A version of the article can be read by clicking here 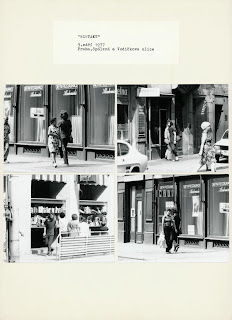 "Wandering could be understood as part of a broader set of strategies within contemporary art that draw attention to the unnoticed, uneventful or overlooked aspects of lived experience. The ‘blurring of art and life’ is not a new concept, but what is perhaps interesting about the current turn towards the quotidian and pedestrian, is that it has been mirrored (even anticipated) by a wider engagement with the writing of theorists such as Henri Lefebvre and Michel de Certeau in other disciplinary contexts [...] (However) It seems counter-intuitive to view wandering according to such a chronologically linear trajectory of ideas, and an alternative genealogy that rescues and critically recuperates earlier models of ambulant digression or deviance somehow feels more appropriate to the range of approaches within contemporary art practice, which are more idiosyncratic and conceptually meandering than we might be led to believe. These other points of reference might include the genre of picaresque literature; the practice of ‘sauntering’ adopted by medieval ‘vagabonds and idlers’; the Romantic or even quixotic quest; the disinterested stroll of the flaneur; the surrealist practice of errance; as well as various conceptual strategies and propositions witnessed in the work of artists such as Vito Acconci, Stanley Brouwn or even Jiří Kovanda. For the gesture of wandering to have any critical longevity within contemporary art, it is crucial that we continue to attend to the nuances and differences between these divergent and eclectic practices, as well as interrogating them according to shared concerns and commonalities. Equally, in the attempt to ‘make sense’ of the current resurgence of interest in wandering, it is perhaps necessary to also acknowledge the worth of straying from or drifting between specific ‘interpretative’ frames of reference, alongside the value of the physical act of spatial digression or navigational detour".
Newer Post Older Post Home