Now in its ninth year, the latest iteration of the ANTI festival in Kuopio, Finland, continued to present site-specific work in the public realm, drawing together diverse live, sonic, visual and text-based practices over a single week in order to explore how artists working with writing and language navigate, read and inhabit the city. Whilst in previous years, ANTI festival addressed issues of site-specificity through themes such as walking (2009), the dramatics of domestic space (2008), body/site/gender (2007) or the relation of documentation to live(d) experience (2006), in 2010 attention shifted towards the ways in which language shapes and is shaped by both the specificity and non-specificity of its location or placement. If the spatial or geographical potential of a location is often fore-grounded in certain site-specific projects – where the term site often appears interchangeable with space – then ANTI resisted this tendency with works conceived in relation to both spatial and temporal experience.

Works such as John Court’s Eight Hours Writing used writing for marking and performing time, reflecting the durational properties of time passing or unfolding. The work involved the artist performing an unbroken act of writing, on a large-scale hardboard ‘page’ located on the floor of a school entrance hall. His inscriptions failed to accumulate into readable text, instead becoming less and less legible as semblances of words gradually overlapped and obliterated the previous layer of writing, producing a dense text whose repeated words – like ‘lines’ issued as written punishment – became increasingly meaningless or mute. However, rather than simply marking or measuring time as a clock might, Court’s durational text reflected an elastic experience of time (for both performer and viewer), where each passing minute felt stretched or moulded by the affects of compulsion, immersion, boredom or exhaustion. Other works actively marked, wasted, killed, lost or shared time through social acts of collective writing or reading – ranging from Holly Rumble’s intense bird-spotting assignments (One Minute Bird Watching) to the hours whiled away slow-stitching the lyrics to love songs remembered in the company of strangers (during performance group Toimintaryhmä Olettamo’s Embroidered Love Songs). 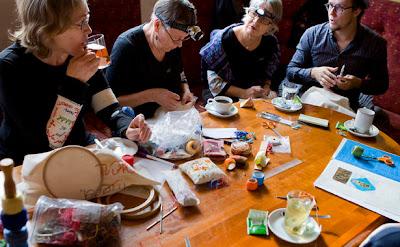 Toimintaryhmä Olettamo, Embroidered Love Songs, photography by Pekka Mäkinen
Whilst these writings reflected the durational aspects of time spent, other work addressed the how – the intensity as much as the where and when – of writing’s timing: they operated according to the logic of kairos rather than chronos. Rupturing the flow of linear, chronological or sequential time, kairos signals towards timeliness: time ready to be seized, an opportune period where something could happen (or else perhaps be missed). In Everyday Opera Johanna Hällsten punctured the daily routines of Kuopio’s inhabitants with unexpected refrains of live opera, creating brief temporal apertures wherein the actions of selected individuals (the first blood donor one day, the last train traveller another) were momentarily synchronized within a live performance to the libretto and rhythm of an accompanying score. The potential of chance encounters and unexpected synchronicities also underpinned Sarah van Lamsweerde’s Instant Fiction, a real-time video dramatizing the actions of often-unwitting coffee-shop customers through the addition of looping subtitles culled from popular television and film. On one occasion, the recording of two rather bored looking coffee-shop staff captured perfectly the sentiment of the sub-title underscoring their non-action: ‘Why do we always have to do something special?’ 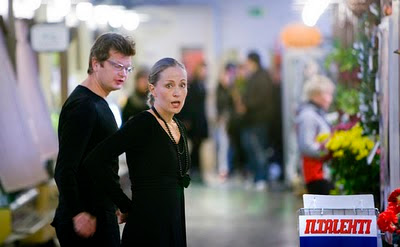 Johanna Hällsten, Everyday Opera, photography by Pekka Mäkinen
Alternatively, some artists exploited the potential of bad or misplaced timing, where words spoken flatly failed to hit the mark. Like declarations of both love and protest, the apology is an utterance whose efficacy is dependent upon its delivery being made at the right time and place. Within ANTI, the apology became dislocated from the time-space of its originary recipient to absurd consequence: in GETINTHEBACKOFTHEVAN’s Weigh Me Down, a list of over 1000 anonymous apologies – ranging from the mind-numbingly trivial to the desperately confessional – were uttered by a lone runner, relentlessly observed undertaking a 12-hour long treadmill marathon. Alternatively, Heather Kapplow’s verbal communication during the festival was limited to the phrase ‘I’m sorry’; a singular statement of atonement following her previously failed relationship with Finland. Kapplow’s self-imposed constraint prevented the details of her relationship from being elaborated; the audience witnessed only the absurd labours of her attempt at making peace.


As with the apology, the art of stand-up comedy often rests in its timing. Not so in Johanna MacDonalds’ Badly Translated Stand-up, where an eight-hour set lost its verve through the hesitant translation of English jokes to faltering Finnish as much as by the overly-extended duration of the assigned task. Words intended to be delivered with urgency or intent became evacuated of meaning and meaningfulness, purposefully drained of their capacity to communicate or connect. However, for Caroline Bergvall, the event of speaking out of time or turn assumed a political imperative; her work, Flag Up, honoured the speech acts and activism of nineteenth-century proto-feminist, Minna Canth alongside contemporary Finnish artist-activist, Sirpa Kähkönen. Canth was a playwright speaking out against the oppression of women in society, whilst for Kähkönen the novelistic form of fiction and storytelling becomes used as critical devices for advocating contemporary radical social ideas. For these individuals, language operates as a tool for taking a stand; their words issue as the soundings of a dissident body speaking out or against – para–doxa. As for many of the artists presenting work at ANTI, the act of writing, reading and speaking has the capacity to activate openings or opportunities within the habitual continuum of daily life, whereby the conditions of a given situation might be considered otherwise.


Herein, perhaps, lies the dilemma at the heart of many site-specific practices in the public realm, for the interruptive capacity of the art event can often rest in its unexpectedness, in how unannounced it breaks with or ruptures the flow of everyday occurrences. Undoubtedly, it was the unsuspecting or opportune audiences  – those accidental or incidental witnesses, who were not purposefully looking out for the art  – that probably experienced the interruptive potential of the work most powerfully. However, there were times when this potential seemed somehow compromised by festival signage or the anticipatory gathering of an audience (programme in hand), whose presence often pre-empted  – and on occasion distracted from  – the experience of the live event itself.