I am increasingly interested in returning to exploring text as a site of practice or at least as a space for testing out some of the ideas I am interrogating within a range more conventionally 'academic' texts. There is the danger that I had begun to forget how important this (usually hidden and invariably sporadic) activity is as part of my practice. I had been thinking about the role of these 'other' forms of writing/text during the 'Host Observatory' project, when I had been writing semi-publicly in a different manner to how I might habitually present text. Below is a rendition of a rather old work, which I think operates in this hybrid space between a form of practice and a visual 'thinking through of ideas' which have become central to some of my more recent work. 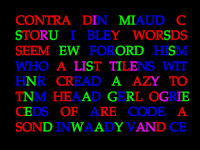 Here, practice is part of a research methodology for other writing or thinking, rather than an end in itself (again rather like that produced during the Host project). It functions a little like the role of the Macguffin (discussed in other pieces of writing) as a vehicle which essentially kick starts the plot but then perhaps disappears from the centre stage. This particular piece draws on a quote from Luce Irigaray from 'This Sex which is not one', and was exhibited as part of Site and Sound in 1997 (Site Gallery and various off-site locations), and later as part of the Islington International Festival, London, 1998. Different coloured light unscrambles different parts and patterns in a grid of letters, allowing different meanings, hidden messages to be read. Manipulating and breaking patterns of communication, language begins to operate within a different set of rules. No longer carrier of meaning its lines of communication can be broken down, transgressed or somehow rendered void. The actual work was a shop window based text installation which could be viewed from the street after dusk.
Newer Post Older Post Home