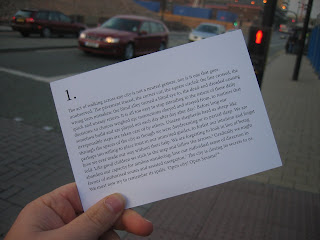 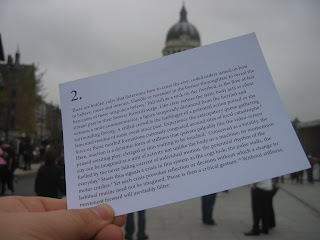 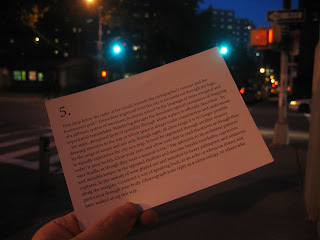 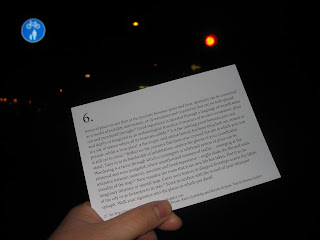 A series of commissioned postcards that were publicly distributed as part of the project, Open City, Nott Dance, October 2007. A further online text at http://pay-attention-to-the-footnotes.blogspot explores the analogy between footnotes and acts of wandering, and provides a critical subtext to the postcards that might remain (without anchor) long after the original texts themselves have disappeared. The essays could be read on postcards distributed publicly across Nottingham during October 2007.

Open City is an ongoing project developed by Andrew Brown, Katie Doubleday and Simone Kenyon exploring how we live in, journey through and experience the human and built environment. Intervening in the space between the conscious and the habitual; the planned and the impromptu, the solitary and the mass, audiences are invited to readdress their position within their city and enter a space where new encounters can take place. Artists Brown, Doubleday and Kenyon have been working with members of the public over the course of the year creating discreet interventions within the public realm. Over the course of the Nott Dance festival in Autumn 2007 the artists invited audiences to contribute to Open City by participating in mass choreographed events, creating a series of invisible performances throughout the city which are captured on camera and beamed back live to festival venues. Everyday movement and gestures become part of a larger choreography where the line between performer and audience are blurred and everyone present becomes included in the work. Postcards were handed out following Nott Dance performances with instructions for audience members to carry out at points over the festival, with texts commissioned by writer Emma Cocker.
Newer Post Older Post Home