I have been invited to produce a text for a publication in conjunction with Inbindable Volume, an ambitious new multi-screen video installation by Karin Kihlberg & Reuben Henry. I am specifically interested in the term 'inbindable', and hope the text may provide a space to explore strategies - of elasticity, porosity, mobility, fragmentation, dispersal (even wildness) - whereby a set of ideas might evade or elude capture or containment. 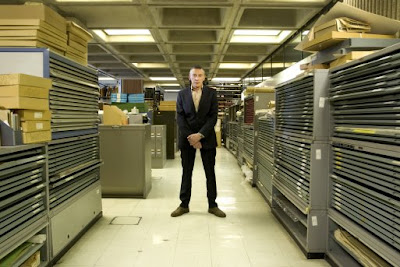 Information about Inbindable Volume
Inbindable Volume is a multi-screen video installation dealing with the journey between the conception of an idea, its materialisation and eventual decomposition/decommission, using architecture and books as its central motifs. The multiple screens journey through the Brutalist space of an empty library interior that unfolds in an assemblage of tracking shots. The concrete physicality of the architecture is sensuously rendered against the unseen imagined spaces alluded to within the books held in the space; drawing a parallel, perhaps, to Jorge Luis Borges' short story The Library of Babel in which the author imagines an infinite number of hexagonal libraries containing books with every possible ordering of letters, spaces, and punctuation marks.
The rhythm and texture of the film is driven by the voice of an omnipresent narrator, who describes the lifespan of a building from conception to abandonment - through a text that skips unsettlingly between past, present and future tense. The elements of the work conspire to generate multiple perspectives in time and space creating a state of flux between continual movement, and a sense of security engendered by the narrator's formal and reassuring tone.
Filmed in Birmingham's iconic Central Library, the city's most infamous example of Brutalist architecture, Inbindable Volume is an exploration of the journey between conception and materialization - both in architecture and books - and what becomes of ideologies after they have been realised in material form.
Launching VIVID's 2010/11 artists commissioning programme, the work has been developed during a three month residency at VIVID's project space in Eastside with the support of The Henry Moore Foundation, Birmingham City of Culture, and the Jan van Eyck Academie, an institute for research and production in the fields of fine art, design and theory in the Netherlands.
The exhibition opens at VIVID on 29 July and continues to 21 August 2010. The exhibition tours to Citric Gallery, Italy in March 2011.


karin kihlberg & reuben henry artists' statement
"Our work is embedded in society's contemporary habit of viewing the world through second-hand information; both in terms of current events, culture and history. How do these documents take form in our minds and what form would they take as an object, text or in a performance? How do documents become part of our own memories and how do they shape our perception of the world we live in?
Documentation, representation, and the narratives that bind history together are utilised by contemporary culture as routes to comprehend and consume the contemporary paradigm. In our work we take these same routes as phenomena to be explored, appropriated, transformed and confused in combination with established structures of drama and fictionalization.
We aim to capture uncertainties of the present and generate an unstable perception of time. We use subjective understandings and non-linear narrative as a method to see an event from alternative angles and perspectives. We are not bound to any particular medium, but are drawn instead to finding ways in which documentation can operate beyond representing the past."
Newer Post Older Post Home