I have been commissioned to produce a piece of writing in response to 'Laying the Bounds' a new work by Helen de Main as part of the northcabin project. The writing was commissioned by the Interface – new critical writing bursary scheme.  In this text, I have attempted to explore how ‘preoccupation’ might function as a mode of site-specificity. An excerpt from the text follows, whilst the full version will be available soon on the Interface website.

“[…] Preoccupation is a dysfunctional state of absorption or immersion, of being wholly wrapped up in something or someone to the exclusion of all else. Curiously, preoccupation does not designate a time prior to or in advance of the act of occupation as such nor the state of being unoccupied, but rather points to a specific and even illicit ‘type’ of occupation that insinuates itself before more legitimate or productive forms have taken hold. Preoccupation is the act of occupying oneself or one’s time – more often non-productively – in a way that is heightened or transformed to the level of a haunting or obsession. It is an improper, all consuming form of occupation that distracts from or prevents other seemingly more useful or permissible kinds of activity from taking place. Herein perhaps, lies its radical or dissident potential.

Whilst some site-specific projects emerge from a particular artist or curator’s preoccupation with a specific site or space, de Main’s approach to north cabin inverted this relation by attempting to preoccupy the site instead. For de Main then, preoccupation emerges as a specific critical and political form of site-specificity. Whilst preoccupation describes a state of mental absorption, it can also mean the physical act of occupying or taking possession of something before someone else. The cuckoo harnesses the potential of this double meaning, attempting to preoccupy both their host’s attention and the physical space within their nest. Like the cuckoo, de Main’s inhabitation of north cabin excluded the possibility of other forms of occupation. Akin to the dissenting squatter, the artist’s attempt to preoccupy the site is a resistant tactic for preventing it from other uses. To preoccupy a site is to distract it from its designated or intended purpose or function; it is to divert its attention or set it to a different tack. For de Main, to inhabit north cabin with a structure that precluded other usage was a way of preventing the site from the insensitive regeneration that so many of its neighbouring buildings had been subjected to. The cabin is suspended between times. It is no longer required to perform the utilitarian function for which it was originally designed, but has not yet been designated a new role or purpose. Here, redundancy produces a creative hiatus or pause, a space in which to conceive things otherwise before a new use or function has been fully determined […]” 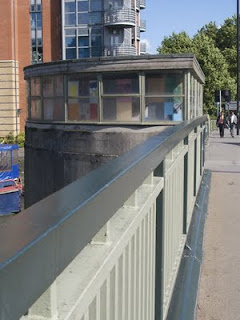 Helen de Main’s new work continues the artist’s interest in exploring interior and exterior spaces and attempting to blur traditional borders. The work, which will consist of a metal structure, made of panels bolted together and then treated with a number of finishes, will reference the urban landscape that surrounds the cabin. Textures and layers of colour will be built up and then sanded back creating a multitude of visual associations. The structure will conceal the 360-degree windows of the cabin, which are a prominent feature of the space. Building on this characteristic, the work will incorporate vents, inspired by grates and speakers similar to those observed in public spaces, which will then be light from within. These vents will offer a potential glimpse or entrance into the cabin for the viewer, drawing their eye inward, yet any visibility into the full interior of the space will be obscured.

Helen de Main’s new work will build on both the site of the cabin as a prominent position within the city and will comment on the current regeneration climate. By encasing the cabin from within, the artist will demonstrate the different ways in which existing buildings are re-developed and come to contain distinct other forms. The work will create a second space inside the cabin with a contrasting set of references, creating a tension between the two structural forms and will challenge perceived hierarchies between architectural structures.