Here is an outline of my revised conference paper to be delivered as part of the 35th AAH Conference "Intersections", at Manchester Metropolitan University, Manchester, 2 - 4 April 2009 (original abstract and context for the paper can be found here). Extracts from the paper and an interview (with Ben Judd) undertaken as part of the research can be found on Ben Judd's website under Interviews and Texts. 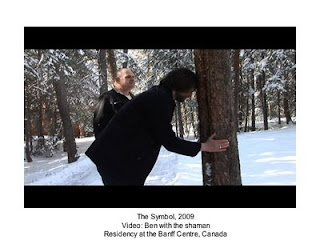 Image: Ben Judd, The Symbol, 2009
This paper explores how the seemingly undesirable presence of ‘inconsistency’ can function within artistic practice as a way to strategically resist, refuse or even attempt to revoke the societal pressure to perform in a consistent manner or from a single, stable position - according to expectation, convention or the norm [...] Arguably, the interrogation of inconsistency requires that certain conceptualizations of both subjectivity and knowledge to be brought into question or challenged – it is a term of ethical and epistemological import. What is at stake in thinking through the terms of inconsistency, perhaps, is the question of what it might mean to be, and in turn how this contingent (inconsistent) experience becomes subjected - even subjugated - to various forms of translation, definition or homogenous representation. Inconsistency, in this sense, is not only a necessary part of practice and thinking - which perhaps disappears as things approach resolution - but can also be deployed strategically as a way of subverting, challenging or resisting the ‘pressure of consistency’ or of conformity, of expectation or of homogeneity. My attempt then is to propose a critical function for inconsistency where it shifts from meaning a mode of dithering or incoherence (a deficiency on the part of the individual) towards a mode of agnosticism or questioning that deliberately reveals the impossibility (or illusionary nature) of singular and stable positions (and which in turn points towards the deficiency of various systems of belief, classification or representation). Here, agnosticism is put forward as a critical form of uncertainty, the doubt that a particular question or problem has a single correct answer or that a complete understanding of something can be attained. Here, agnosticism is a mode for addressing the experience or perhaps even the problem of being human, by insisting on the inadequacy of any single or consistent model of its representation.

My encounters with various artists (including Ben Judd, Vlatka Horvat, Dutton + Swindells) have enabled an understanding of inconsistency to develop where it shifts from a mode of refusal (of a binary logic or of the tyranny of consistency) to one of possibility (a form of affirming multiplicity and productive heterogeneity). In this paper, I want to indicate four (overlapping) models of inconsistency emerging within specific artists’ practice – inconsistency as shimmer (being both, remaining in between); inconsistency as the flagging of possibilities; inconsistency as impasse or obstacle (as an aporetic stammer); and inconsistency as rupture (the emergence of the unexpected). In each model of inconsistency, the underlying struggle perhaps is to question or refuse the dominant pressure towards consistency or homogenization especially in relation to the experience of self and its subsequent representation. Inconsistency is a way of resisting or rejecting consistency as the desirable paradigm, a device or tactic for thwarting the easy assimilation of complex human experiences into a single or stable position. It reveals the inadequacy or fallacy of existing systems of classification or representation, whilst simultaneously attempting to rupture such systems in the pursuit of something new. Inconsistency describes a mode of restlessness, of being critical of or frustrated with existing options; of relentlessly searching for or trying to produce some other way of adequately describing the experience of being"
Newer Post Older Post Home